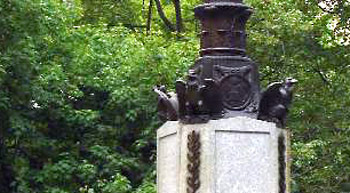 The NYC Parks Dept. is requesting that the Dept. of Justice return two sculptures of American eagles that were stolen from a war memorial to city employees back in the 1970s. The memorial itself is a flagpole located in Central Park across from the Naumberg Bandshell. It's called the City Employees War Memorial and was installed in the park in 1926 to commemorate the heroism and sacrifices that city employees made in all the wars of the nation's history to that point.

In 1976, however, the four eagles that perched upon the six-foot granite base of the flagpole disappeared. The memorial remained un-staffed by bronze eagles until 2003, when the Parks Dept. finally had the stolen sculptures replaced. It turns out that the area around the flagpole used to be a popular drug-dealing spot in the 1970s, and that dealers would often stash their drugs inside the eagles--Bicentennial fever was in the air apparently and even dealers were feeling patriotic. At one point, an unnamed drug dealer stole the sculptures and the drugs held within.

In March of this year, the dealer, who is now working as a confidential informant for law enforcement connected with the U.S. Attorney's office, described how he kept the eagles in his apartment for many years, before eventually selling two of them for $200 to a "client," who then installed the stolen sculptures in his Rockefeller Center office as decorations.

The bronze eagles were sculpted and cast by Georg Lober, who also sculpted the Hans Christian Anderson with the Ugly Duckling piece near the boat pond on the eastern side of Central Park. Coincidentally, the young swan that Lober sculpted and who seems to be attentively listening to Anderson read his story of the ugly duckling was also stolen in 1973, and then later recovered.