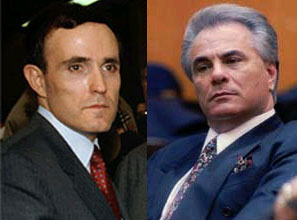 Former FBI agent Roy Lindley DeVecchio has been on trial for four counts of murder, as prosecutors have accused him of being a mob informant. And the trial is being described as a "blockbuster" because it's "one of the worst law enforcement corruption cases in U.S. history." But DeVecchio wasn't centerstage yesterday - news about former Mayor - and former U.S. Attorney - Rudy Giuliani riveted the court.

DeVecchio worked with mob informant Gregory Scarpa Sr., and their alliance led to four murders between 1984 and 1992. During yesterday's testimony, FBI agent William Bolinder noted a memo from DeVecchio, using Scarpa information, that stated, "On Sept. 17, 1987, sources advised that recent information disclosed that approximately a year ago all five NY LCN [La Cosa Nostra] families discussed the idea of killing USA [United States Attorney] Rudy Giuliani and John Gotti and Carmine Persico were in favor of the hit... he bosses of the Luchese, Bonanno and Genovese families rejected the idea, despite strong efforts to convince them otherwise by Gotti and Persico." Gotti headed the Gambino crime family, Persico the Colombo. The Smoking Gun has the actual memo - note the FBI's style of capitalizing the major players.

This alleged meeting could have been around the time Giuliani was prosecuting the various crime bosses in the "Commission" trial, which resulted in the conviction of Persico and the heads of the Lucchese and Genovese families. And this isn't new news to the former mayor - last week, Giuliani told Fox News, "The reality is, I've dealt with this all of my life. If you've got to live with threats, you live with threats."