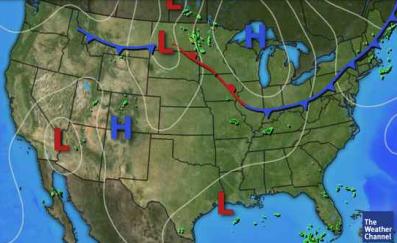 So, last week's weather featured intense rain that shut down the subway system, a tornado skipping through Staten Island and Brooklyn, an unbearably steamy afternoon, and a couple days of near-record low temperatures. This week's weather should feature, uh… uh… well, not much of anything other than warm, sunny days.

If you haven't already seen it the Brooklyn Daily Eagle has a nice, but small, map of the tornado path. First touching down on Staten Island, the twister skipped over the Verrazano Narrows to touch ground again in Bay Ridge. Hopping along it zigzagged its way to Fort Hamilton Parkway where the twister moved eastward until finally pulling back up into the clouds south of Prospect Park. Seventy houses were damaged, 31 had to be vacated, and over 200 trees were torn down. For reasons we don't understand the Weather Service's Storm Prediction Center, which gathers the official records of tornado occurrences, has the Brooklyn Twister occurring on the wrong day.

We're just prattling on about last week's weather because there's really not much to say about this week's. Partly cloudy the rest of the day today. After a cold front passes tonight, tomorrow's skies will be totally devoid of clouds and slightly cooler –the high will be 81-82. Wednesday and Thursday will be the hot days of the week and there's a tiny chance of a rain shower on both of those days. The weekend, if you're already making outdoor plans for next weekend, is looking to stay clear and be a little cooler. Maybe we should pay attention to the tropics, where Hurricane Flossie is threatening Hawaii, and Tropical Depression 4 has formed in the Atlantic.