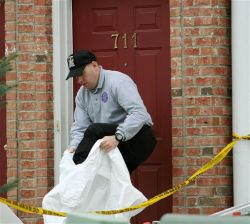 As the search continues for missing Brooklyn woman Laura Garza, police say they have found a bleached section of carpet along Route 17 in Bloomingburg that appears to be the same one that was missing from Michael Mele’s apartment in nearby Wallkill. While police wait for it to be tested, a spokesman said, “It is anticipated that it will be significant.” The discovery came a few days after police questioned Mele’s girlfriend, who had allegedly helped him remove the carpet the day after Garza disappeared.

Joining the hunt in the Orange County area around where Michael Mele lives and owns a Quiznos were two of Garza’s brothers, in from Texas. Her brother Nicholas addressed Mele saying, "Tell us where you dropped her. Speak up!" Mele has not answered police questioning about any role he may have had in Garza’s disappearance and remains a “person of interest” while he has been jailed for violating probation.

CBS 2 also heard from Garza’s co-worker who was at the club with her the night in question. She reiterated that her friend was not the “flirty” type, also stating. “She had only two drinks by the time I left. She was not drunk nor was she under the influence of any drug.”

And in what’s become almost an exercise in redundancy at this point, both the Post and the Daily News today talk to people from Mele’s past who continue to share unsettling anecdotes about the sex offender—from the dozen women who have come forward to talk to police about Mele to high school friends who tell about his “huff and puff” prank phone calls.