“This is Occupy NYCHA, ya’ll,” announced Carmen Quiñones, as she paced back and forth before the altar of Harlem's New Mount Zion Baptist Church, where a modest handful of concerned New York City Housing Authority (NYCHA) tenant presidents and residents had assembled in late June.

While Quiñones's promises may not be technically accurate—the group hasn't yet received a permit for the City Hall steps—she remains a force to be reckoned with. Born and raised in New York City, Quiñones is a Puerto Rican who switches easily between English and Spanish, with a voice that rises to righteous heights and drops precipitously to soothing lows.

As tenant association president at Douglass Houses on Manhattan’s Upper West Side, a development of more than 4,000 residents, Quiñones seems to know everyone, and addresses their troubles or triumphs as easily as she addresses local politicians, whose personal mobile numbers she dials without hesitation. Earlier this year, she made headlines when she met with President Donald Trump and Vice President Mike Pence at the White House to discuss the living conditions of NYCHA residents.

Quiñones and other NYCHA tenant leaders began organizing for Occupy NYCHA after the city announced that it would seek to partially privatize 62,000 housing authority apartments via the Rental Assistance Demonstration (RAD) program, an Obama-era initiative to stabilize federal funding of public housing using private investment. In RAD—and a related city program dubbed Permanent Affordability Commitment Together (PACT)—public housing complexes are moved from one stream of federal funding to another: from Section 9, which is standard public housing, to Section 8, where buildings are controlled by private operators and tenants receive vouchers to pay rent.

For Occupy NYCHA organizer Cynthia Tibbs, a tenant leader at NYCHA-run brownstones on the Upper West Side, the concern is that a shift to a private operator will cost tenants vital protections, and ultimately their homes.

“With every protection, there’s a loophole," said Tibbs, who possesses an encyclopedic knowledge of NYCHA rules and regulations. "NYCHA has a standardized lease for all of its Section 9 residents, but in RAD or PACT it’s not standard, leases aren’t identical, and most tenants do not see the leases until they are asked to sign them.”

Occupy NYCHA has drawn new urgency from the June appointment of Gregory Russ to lead NYCHA, at a time when the agency's 178,000 units of housing, representing 11.6 percent of the city's rental apartments, are in need of an estimated $32 billion in repairs and renovations.

Claudia Perez, tenant association president at Washington Houses in East Harlem, shares Quiñones’ and Tibbs’ concerns. Although her development is not currently scheduled for conversion via RAD or PACT, Perez knows that one day it could be. “My role is to galvanize people, and to help them understand how important this fight is,” she said.

Quiñones, Tibbs, and Perez first met several years ago when the three were members of Community Voices Heard, a membership organization for women of color and low-income families. The three form the nucleus of the nascent movement, reaching out to tenant association presidents and residents alike via text messaging, email, and social media.

A proud mother of four, with nineteen grandchildren and five great-grandchildren—a legacy she often cites—Quiñones traces her political roots to youthful aspirations. As a phlebotomist at Metropolitan Hospital, in East Harlem, she spoke out about issues like patient abuse, and claims this activism led to her eventual dismissal. During these years, she began serving on tenant patrol at Douglass, where among other responsibilities she supervised the comings and goings of building residents. “It was almost like policing,” she recalled.

In the intervening years, Quiñones developed a taste for politics, and was ultimately elected a Democratic district leader. At the Democratic National Convention in 2000, she led a protest effort on behalf of the decades-long campaign to close the U.S. Navy’s facility on Vieques, a small island off the coast of Puerto Rico. That facility was eventually shuttered in 2003.

“I participated in Occupy Wall Street, just protested. I’ve always protested,” she remembered. “And we’re already [in NYCHA], so we’re already occupying. This is our home. So why not call it Occupy NYCHA?” 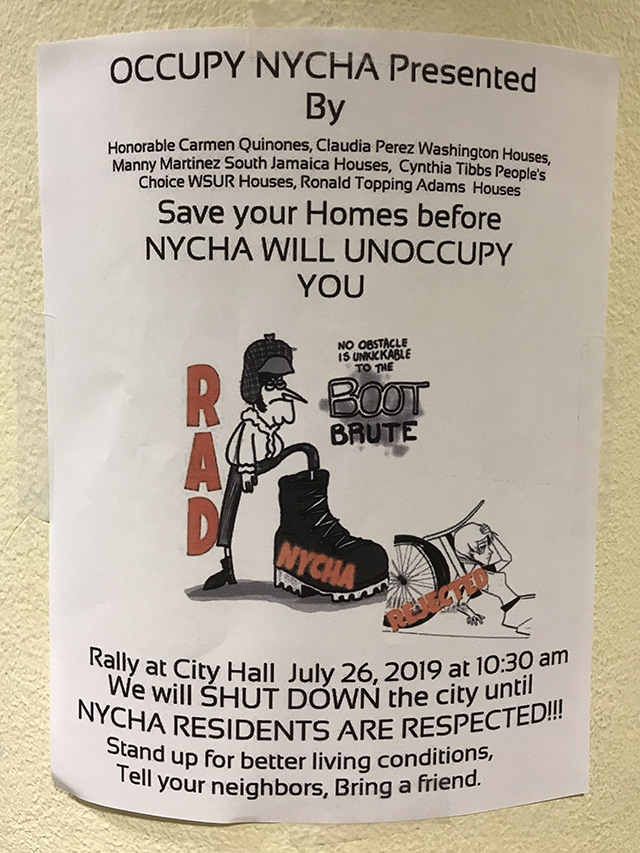 On July 12, nearly a hundred NYCHA tenant association presidents and residents—from as far away as Castle Hill in the Bronx, Arverne and Far Rockaway in Queens, and Mariners Harbor and Richmond Terrace in Staten Island—convened in the gymnasium of the Dream Charter School near Washington Houses. Among them was Daniel Barber, president of Jackson Houses, in the Bronx, as well as chair of the Citywide Council of Presidents, a NYCHA tenant president organization. He say he’ll be there on July 26, and hopes for a large turnout.

“Residents are fed up, so they’re starting to come out," said Barber. "I hope Carmen can get a thousand people—I do hope they come out. It starts with the residents, the residents have to say enough is enough, and be willing to stand up and fight for what they call home."

There is some evidence the word is getting out: In the lobby of a NYCHA development Gothamist visited while pursuing another story, a woman was taping Occupy NYCHA flyers to the walls. Did she know the organizers? No, she hadn't met them just yet, she said, but she'd seen a post on Facebook and planned to attend Friday's rally.

After July 26th, the group plans to hold town halls in the South Bronx—hosted by a co-organizer, Ronald Topping, who is president of the John Adams Houses—and in Queens, home of another leader, Manny Martinez, tenant president at the South Jamaica Houses.

Beyond that, Occupy NYCHA hopes to harness the immense political potential that approximately 400,000 NYCHA residents could wield. Organizers said they are keen to hold voter registrations in every development, and to run candidates at the local level to challenge elected officials who NYCHA residents feel have been unresponsive to their concerns.

That includes Quiñones, who plans to run for office, although she remained mum as to which race she would enter. However, City Council Member Mark Levine, who represents the 7th District, is widely expected to seek higher office, and his seat could be the one she’s eyeing.

"Why do they think they'll get away with this?" Quiñones asked, referring to those elected officials who support RAD and PACT. "Because public housing residents don't vote."