Meet The Proud Cat Killer Of Brooklyn And Queens

Dozens of cats in Brooklyn and Queens have been killed by an "angel of death" trained to trap-neuter-and-return, who now wants to do the right thing and "save" them, a fact which might never have come to light if it weren't for one unfortunate orange cat from Bushwick named Anthony.

On November 20, FIT adjunct Marie Nasta noticed that her indoor-outdoor cat Anthony—a stray who moved into her Bushwick apartment in 2008—hadn't come home for dinner again. She gave him a day to make it back and then proceeded to get worried. She filled out lost pet reports, scanned the internet for information and fretted because an Asian man had been seen laying traps near her home. She received some disturbing tips but kept up hope. Until last week, when a man named Paul Zhang admitted to her he had put her cat to sleep.

"No, I'm not denying it," Zhang, 41, told us. "These are the facts. I've been feeding nine colonies in Ridgewood and Bushwick for years. But for various reasons I can not continue feeding them." Rather than leave the cats to fend for themselves or to be fed by another kind soul (which he says he tried to find) he chose another route. "I trapped them and brought them to vets to be euthanized. Unfortunately in one of my colonies one of the cats I trapped and euthanized was [Anthony]." While it is illegal for vets in the city to kill strays without waiting, they are allowed to kill personal pets—and Zhang felt the strays from the colonies he has been feeding are his.

"He denied it at first," Nasta told us. "He was very lucid and polite. But the timing and the fact of the cat's personality didn't sound right. So when I called him back I asked him again. And finally he admitted he'd taken him to a vet." She says her heart dropped when he admitted the truth.

To let out her anger, Nasta turned to Craigslist to air her story, and not only did people show up to howl in horror—Zhang himself appeared to sign on to give his side of the story:

I feel very sad for what happened because Anthony did have a loving home. Please don't feel insulted by my saying this: Too many pets get lost and many of them have a worse fate out there than to be humanely euthanized. I don't know why this happened but it did. If I could bring Anthony back, I would. I could feel how much you loved him. Perhaps because so many people abandon their animals, especially in Bushwick area, I just made a wrong decision thinking, like all of the other cats, no one would look for them.

Many people have made physical threats against me. You may have read my posting that I do not fear death at all and I look forward to it because I have a firm belief of the beauty of the after life. If it's any consolation, you will see Anthony again just as I will reunite with all of my animals again. I don't think I'm crazy or psycho, maybe I would rather choose loss of life over likely or potential life of suffering depending on how secure I perceive an animal's future. I chose to euthanize my own house cats because I couldn't bear the thought that they may end up in a not so good home and that they may get abandoned or got out by accident and never to be found again which I have seen far too many times.

Since the sad story of Anthony went online, a letter writing campaign has been started to warn vets that Zhang may not own the cats he says he owns (his MO is to tell them the strays are his "own feral colony" and that he is leaving town and can't keep them) and the Mayor's Alliance, for which he says he has helped TNR (trap-neuter-return) thousands of cats, has demanded he return the traps they gave him ("That's fine," Zhang told us. "They can take their traps and shove it. They have no idea what they are going to lose. They want five or six back? That's fine, I bought more of my own."). And some other animal organizations Zhang has worked with over the years have come forward to apologize for ever working with him, calling him disturbed. 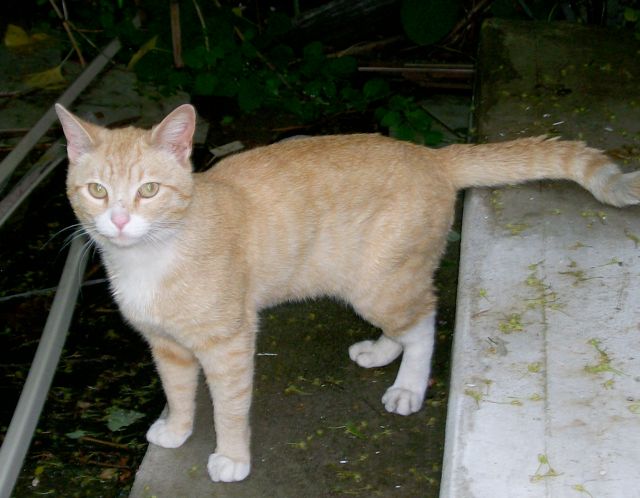 Anthony in his native habitat

As for the vet that put Anthony to sleep, it is hard to prove anything without a body, but Zhang readily admits that he took Anthony the cat to the Antelyes Animal Hospital. In fact, he says that Anthony was the last cat (of ten) that that vet was willing to put down for him before putting their foot down. However, while they admit they have worked with Zhang in the past, they won't cop to killing Anthony, and are adamant they stopped killing cats for him (and changed their kill policy) after it became clear what he was doing:

We did euthanize several cats for him, believing that we were doing the right thing. We scanned them for microchips but none had them. After a short while we offered him several options. We offered to take in some of the cats to use as barn cats. He refused. We offered to spay/neuter and release at low cost. He refused. We offered to find good homes for these cats. He refused. After that we told him we will not help him anymore and to find another vet. He threatened to drown the cats at home. This when his true sick nature was finally displayed to us. We deeply regret that we even helped him for a short time.

Meanwhile, Nasta is coming to terms with the reality that Anthony and many of the other strays she would feed aren't coming back—"I won't be suing. What I wanted to have happen is happening. Vets are being warned. I hear they confiscated his traps. My primary concern was that he stay away from my neighborhood and stop killing cats!" Finally, yes, she will now be getting her other pets microchipped (as should you!).

"I took Anthony in off the street 4 years ago," she wrote. "He was sweet, mellow and very laid back. Nothing bothered him. I called him the rastafarian cat. One of my other cats, Parker, keeps looking for him and crying. Our hearts are broken."

#animals
#anthony the cat
#aspca
#cats
#feral cats
#pets
#strays
Do you know the scoop? Comment below or Send us a Tip