Yesterday's march provided plenty of opportunities to see woke children. But what do these kids grow up to be? It's not always the case, but at least some of them might grow up to be the kinds of high school kids who call Congress and ask strangers to send postcards in support of reproductive rights to their representatives, like new organizing group Coalition Z did on Friday.

High school students Bryson Wiese, Alex Lehman and Zoe Davidson brought together 50 of their fellow students at Impact Hub in order to "meet this presidency with concrete action" according to Wiese. The students, who came from a variety of public and private schools around the city, were drawn together under the banner of Coalition Z. Lehman told Gothamist that the purpose of Coalition Z was to give students, who might otherwise feel they don't have a voice in politics since they're too young to vote, the chance to take "proactive action, and stand up and make their voices heard."

Wiese, Lehman and Davidson said that Friday's activities at the Impact Hub involved breaking student volunteers into a number of groups that focused on different ways to organize and agitate against the Trump administration. Lehman headed up an effort to make postcards against a rollback of reproductive rights with the message "We won't go back," sent students out to the streets to ask strangers to sign them, and then sent the postcards to House majority leader Paul Ryan. According to Lehman, 400 postcards were made and signed. 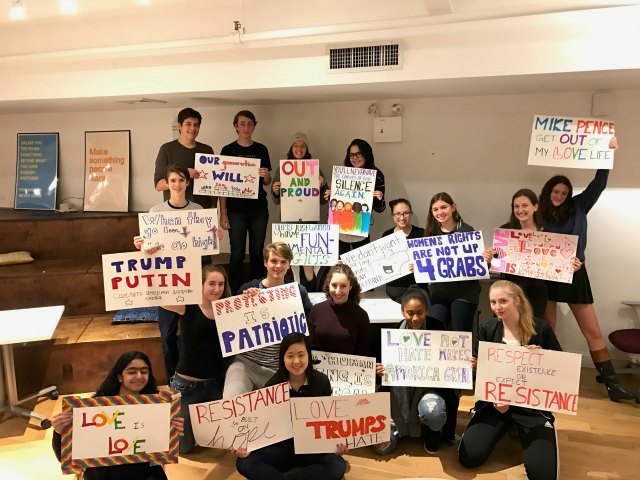 Davidson, who's also volunteered for the Clinton campaign, coached volunteers on how to contact companies to ask them to no longer allow their ads to appear on Breitbart, and to reach out to Simon and Schuster to ask the publisher to drop the book deal given to Milo Yiannopoulos. "Breitbart consistently publishes racist, sexist, homophobic content that's deeply offensive to everyone in my community," Davidson said. "Regardless of the site's connection to the Trump campaign [through Steve Bannon], their content is something we want to protest."

Wiese said that he was in charge of asking students to call legislators about environmental issues, the ACA repeal and voting rights. Closest to home, students called their local state representative to ask them not to back the State Senate effort to overturn New York City's plastic bag fee. "If you learn to call your representative as a high school student, it leads to a lifetime of activism opportunity," Wiese said.

Following the lobbying, the high schoolers held a rally outside of Trump Tower. While Davidson, Lehman and Wiese were already familiar with activism, having phone banked and made trips to Albany to lobby their legislators, and government (all three are involved in model U.N. and model Congress), there was a hope that Coalition Z could be used as an organizing force for students who weren't always as involved with government.

"There was a lot of energy in the room," Davidson said. "People were upset during the inauguration, but they were already pivoting to active responses to Trump's presidency."

#coalition z
#president trump
#teens
#woke teens
Do you know the scoop? Comment below or Send us a Tip