About 140 kilometers off the coast of Montauk and 100 meters below the ocean’s sunlit surface, the seafloor becomes a steep cliff overlooking an expanse of near total darkness. This is the Twilight Zone. The real one.

The Twilight Zone — or mesopelagic — describes the midsection of the entire ocean, going down about 1,000 meters before transitioning into the deep ocean below. Until recently, little was known about it besides the fact that it plays host to the diel vertical migration, a daily smorgasbord when hundreds of species of fish, tiny crustaceans, and other organisms move toward the surface to feed. But scientists are increasingly interested in another important job done by the Twilight Zone: staving off a climate change-related apocalypse. 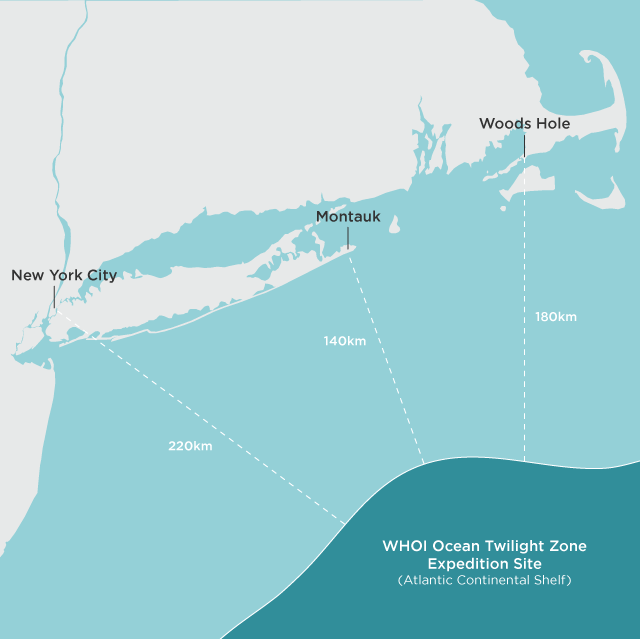 As carbon emissions continue to fill the Earth’s atmosphere, a sizable amount also passes into the oceans, ultimately descending to its deepest region, where it can stay for thousands of years before resurfacing. This process is known as nature’s “carbon pump,” and the Twilight Zone, as the ocean’s midlayer, powers much of this life-as-we-know-it-saving process. Carbon stored safely at the bottom of the ocean can’t contribute directly to heating up our atmosphere.

“If you turned off the ocean’s biological carbon pump, you would double the amount of carbon dioxide in the atmosphere in terms of what humans have already added,” said Ken Buesseler, a senior scientist studying the ocean’s carbon cycle at the Woods Hole Oceanographic Institute (WHOI) in Massachusetts.

The creatures that flock to the Twilight Zone during the diel vertical migration don’t just eat each other, they eat phytoplankton and small particles of organic material floating down from the surface that contain carbon. In fact, their voracious appetites help reduce the amount of carbon passing through to the deep ocean by about 90 percent. “It's a very efficient removal,” Buesseler said. 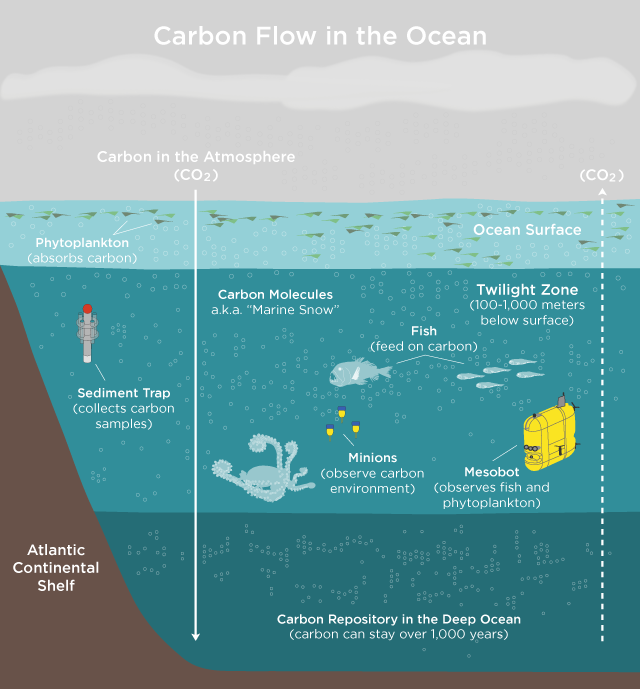 But there is a limit to how much carbon these organisms can consume. According to Buesseler, humans release at least eight to nine gigatons of carbon each year. The scientists are concerned that the ocean, as massive as it is, can’t handle an unlimited amount of the stuff. At some point, higher levels of carbon in the ocean as well as threats from commercial fishing to the sea creatures who eat this carbon may damage or break the pump, causing who knows how much damage to the planet.

These potential threats have fueled a new sense of urgency within the scientific community to learn more about how the Twilight Zone works, and how much carbon it can handle. “We've kind of ignored the Twilight Zone as a major player, and I think that's changing,” Buesseler said.

To better understand the workings of the mesopelagic, Buesseler and his colleagues at WHOI recently launched The Ocean Twilight Zone project, starting with field work off the coast of Long Island.

“We've known about the Twilight Zone for over 100 years, but [an understanding of] its impact on the carbon cycle and climate is more recent. We're finally building up the technology to address some of these questions,” Buesseler said.

Previous research efforts focused on removing specimens from the Twilight Zone for examination, but the WHOI team and their partners are developing innovative new technologies, including remote sensors and deep sea robots, that allow them to monitor the activity there as it happens, providing a richer picture of the ecosystem.

For example, the “Mesobot” can follow and observe the behavior of fish and other organisms in their natural habitat. And remote sensors, known as Minions, can take thousands of photos of the Twilight Zone at varying depths. Scientists hope to match the environmental observations from this technology to carbon samples taken at different locations in the Twilight Zone, in order to better understand how and where the organisms eat the carbon.

“We can not only see these organisms in their natural habitat, but we can also follow them and see what they do throughout a 24-hour period,” said Joel Llopiz, a WHOI biologist and fish ecologist working on the project. Llopiz and others have observed the tendencies of fish in the Twilight Zone to feed at night and hide from predators before daybreak.

“We think that potentially half of the organisms in the Twilight Zone make this migration every single day, and that is really what is fueling this carbon flow from the surface to the deeper waters,” Llopiz said. 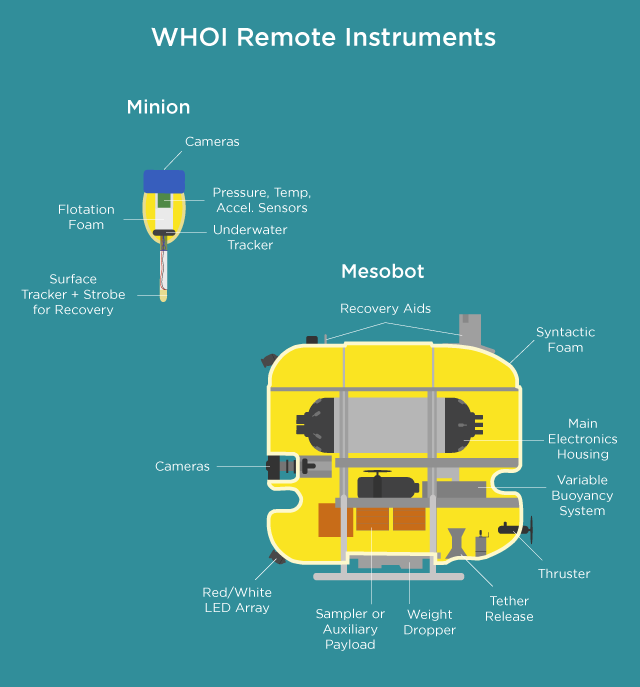 Learning more about the Twilight Zone requires constantly improving the data-collection technology. “One of the main goals of the Twilight Zone project is to advance the technology so that it's cheaper, and increases our capability of putting multiple sensors out there for weeks to months to possibly years,” Llopiz said.

At the moment the Twilight Zone is mostly beyond the reach of commercial fishing, but that could change as the industry expands. Fish and other small creatures, like those found in the Twilight Zone, could be used as food for farmed fish. Scientists are concerned that any decrease in the number of these carbon-eating animals in the Twilight Zone might lead to serious consequences for the planet.

“Usually we're playing catch up, we have impact first and then we realize that we've messed up and that we wish we knew something about that ecosystem before we messed up. Here's a chance to get out ahead of that before we make a mistake,” Llopiz said.

For now, the WHOI team is analyzing the data they’ve collected so far and improving their instruments before returning to the research site off the coast of Long Island later this year. In the meantime, try not to think about what would happen if all that carbon escaped into the atmosphere and instead check out some of the incredible creatures the WHOI team found during their first expedition.

For more on the Twilight Zone, listen to reporter Clarisa Diaz's segment on WNYC:

Clarisa Diaz is a designer and reporter for WNYC / Gothamist. She was a 2018 Ocean Science Journalism Fellow at the Woods Hole Oceanographic Institution. You can follow her on Twitter @Clarii_D.

#climate change
#fish
#twilight zone
Do you know the scoop? Comment below or Send us a Tip