Meet The Fish Of The East River

April marks the opening of fishing season for many types of fish around New York, but before you cast your line into the East River, please know that it holds many weird and sometimes horrifying things. Nevertheless, folks from all over the city still like to fish the river. Actually, contrary to the name, the East River is not a river at all, but a tidal strait with water sloshing back and forth between the Upper Bay of New York Harbor and the Long Island Sound. It supports a large range of diadromous and saltwater fish. (Diadromous fish spend part of their lives in saltwater and part in freshwater.)

“There’s a very large diversity of fish in the East River because it’s got changing salinities,” said Melissa Cohen, a regional fisheries manager at the New York State Department of Environmental Conservation. “We also have very variable temperatures in this part of the country, so we get a lot of fish passing through.”

Despite this wonderful variation, the New York State Department of Health warns that many of the fish you may reel in are not, I repeat, not safe to eat. Still, fishing can be a peaceful endeavor in an otherwise hectic city. Before you catch and release this spring, here is our handy guide to help you identify some of the most common fish you will see: 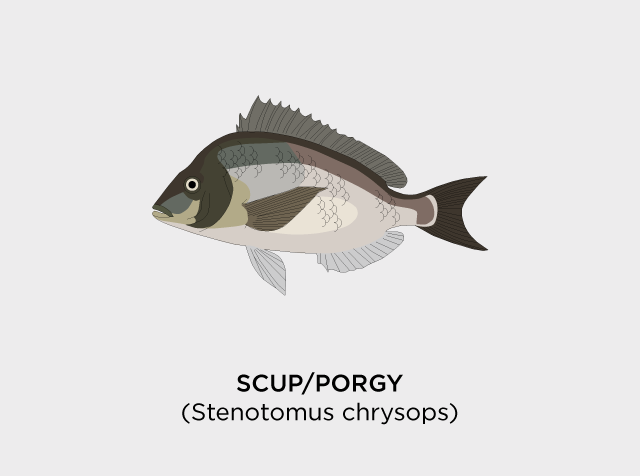 Scup or porgies, are small, fairly flat fish. They have a continuous dorsal fin with long sharp spines and a deeply concave tail with sharp corners. Porgies are somewhat migratory, moving inshore and north in the spring and reversing that pattern in the fall. They are bottom feeders, eating a variety of invertebrates during daylight hours. Porgies seldom exceed four pounds. The average size you’ll see is less than one pound. 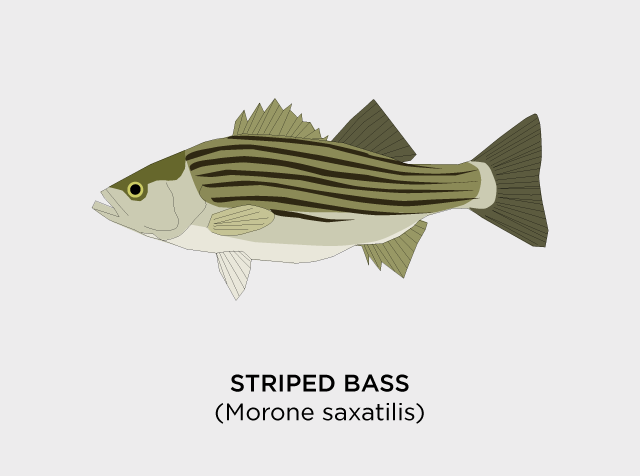 As the name implies, striped bass are characterized by the presence of black stripes along the length of the fish. Stripers are seasonal migrants, though some fish are found in city waters year-round. Their preferred habitat is inshore near structures such as rocks and pilings, but these fish can also be found in open water. Although striped bass can grow in excess of 40 pounds, most of the ones you’ll see range from three to 30 pounds. 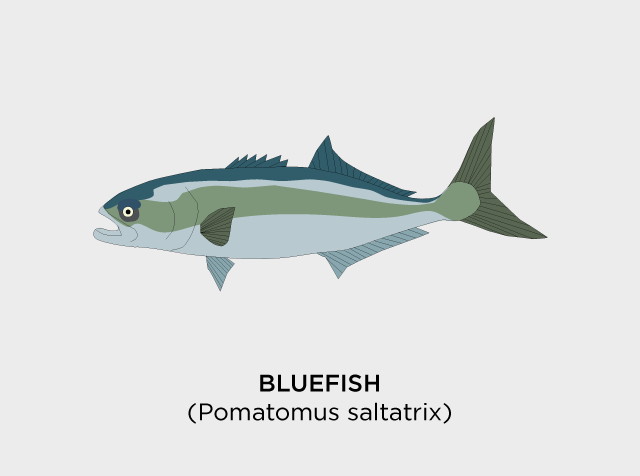 Bluefish are long, moderately stout fish, with distinctly forked tails. They are known for being fierce fighters on fishing lines. Bluefish are coastal migrants that travel in schools into local waters in the spring, following mackerel and bunker. They range in length from nine to 24 inches and weigh 12 to 15 pounds. 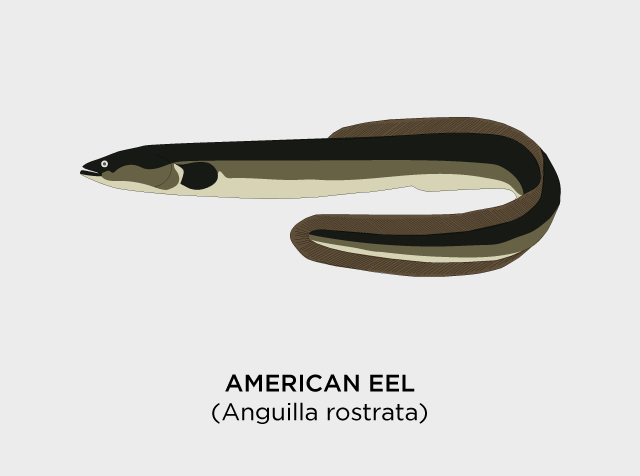 Eels are elongate, snake-like fish with small scales deeply embedded in the skin. Eels are born in saltwater, grow and mature in freshwater, and return to the sea to spawn.

“Eel have an amazing life history, they actually spend most of their lives in freshwater then swim out to the Sargasso Sea in the Northern Atlantic Ocean,” Cohen said. “When they reproduce, their young actually travel all the way back to our freshwaters, which is pretty amazing.”

Eels feed on living and dead material while trying to avoid being eaten by a number of other fish, including striped bass. Adult females are generally larger than males with an average length of two to three feet. They prefer quiet waters with muddy or sandy bottoms.

Sadly, the population of American Eels has decreased due to blocked waterways and overfishing. 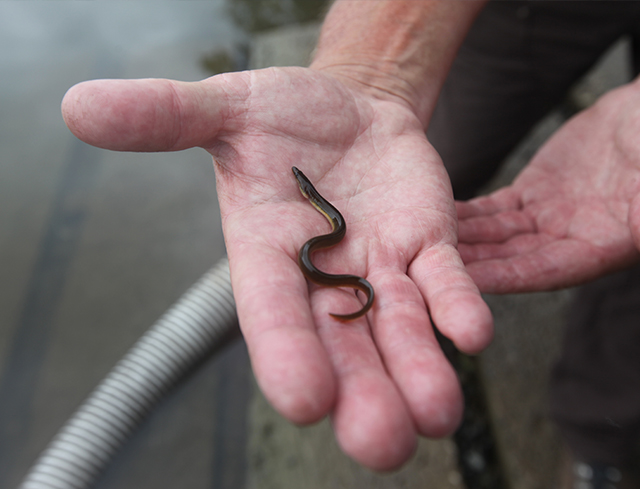 The East River is home to many juvenile American Eels, which can fit in the palm of your hand. (Greg Thompson, U.S. Fish and Wildlife Service) 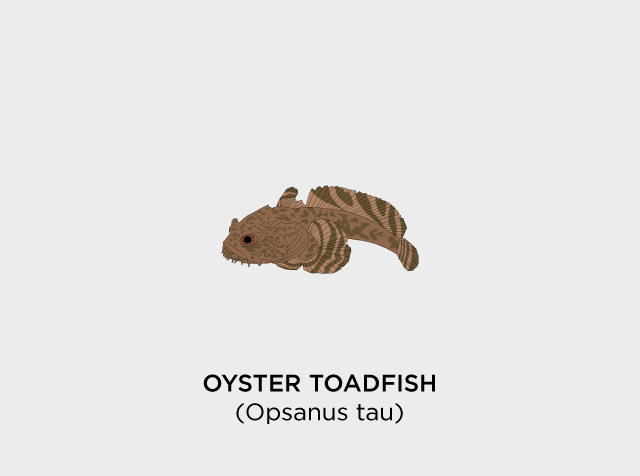 New York’s hottest fish is the Oyster Toadfish. Ok, maybe not. While some people do consume Oyster Toadfish (again, don’t), they are usually discarded because of their appearance.

“I’ve actually seen their dead carcasses on the side of the East River because people consider them not worthy of keeping and eating. It’s really kind of sad because they just kill this fish because it decided to eat their clam [bait].”

Oyster toadfish can grow to about a foot long and are found in salt and brackish waters, preferring areas with sandy, muddy bottoms, oyster reefs, shoal water, eelgrass beds or in hollows and dens. They are quite capable of living in polluted waters and have been known to find shelter in submerged tires and cans.

Oyster toadfish rely on camouflage to catch their food, usually preying on crustaceans, mollusks, amphipods, squid, and other smaller fish. Males make a distinctive foghorn sound to attract females in the April to October mating season. 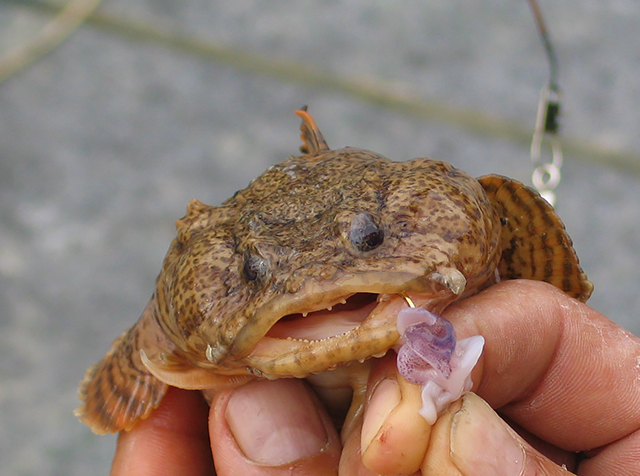 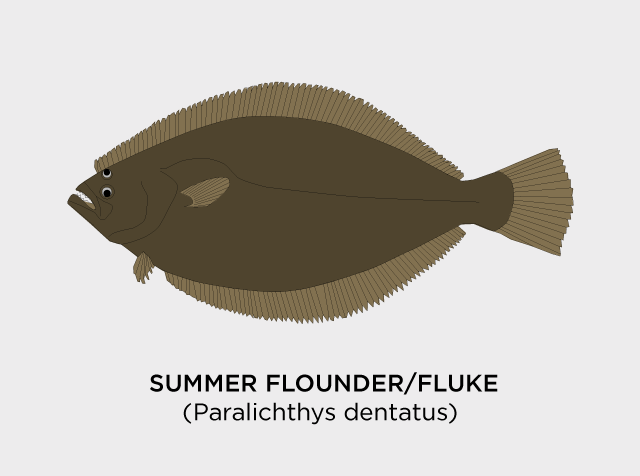 Summer flounder, or fluke, are left-eyed flatfish. (The winter flounder is right-eyed.) You’ll know this by the direction the head points when laid flat with the eyes on top. Fluke can alter their coloring, from white sand to black mud, to match the substrate.

Fluke move inshore in the spring, reversing this pattern in the fall. They are active predators, spending most of their time hiding in sand on the river bottom, waiting to attack smaller fish that swim by. While they seem to prefer sand or mud, they often gather near structures.

Fluke can exceed 20 pounds, but most specimens are only one to three pounds. 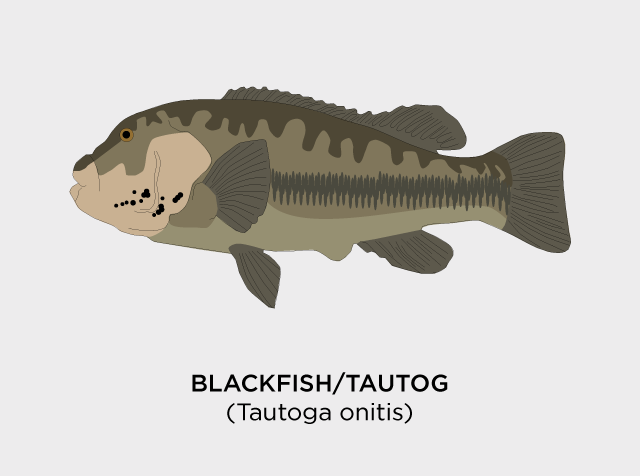 Blackfish are somewhat flattened, stout-bodied fish with blunt heads. They are characterized by their dark color, thick rubbery lips and continuous dorsal fin. Their small jaws are lined with conical teeth which are used to crush hard-shelled prey like mollusks and crustaceans.

Blackfish move into local waters in spring to spawn over rocks and artificial reefs. Afterwards, they spread out over rocky areas and grass or shellfish beds to feed. While blackfish can reach nearly 25 pounds, the average specimen ranges from one to four pounds.

Fish Advisories from the New York State Department of Health.

As previously noted, a good rule of thumb is to avoid eating fish caught in the East River. The “river” is dangerously polluted with chemicals.

The New York State Department of Environmental Conservation produces fact sheets that note all of these pollutants, including floating debris, oil, and grease. Some sources of the pollution are urban and storm runoff, combined sewer overflow (CSO), industrial use of the waterway, and littering.

The New York State Department of Health issues fish advisories, many of which include fish containing PCBs, Dioxin and Cadmium. “DON’T EAT” in all caps is advised for most fish for women under 50 and children 15 and under. If you still want to eat these fish, or fish found anywhere in New York waters for that matter, consult the advisories. 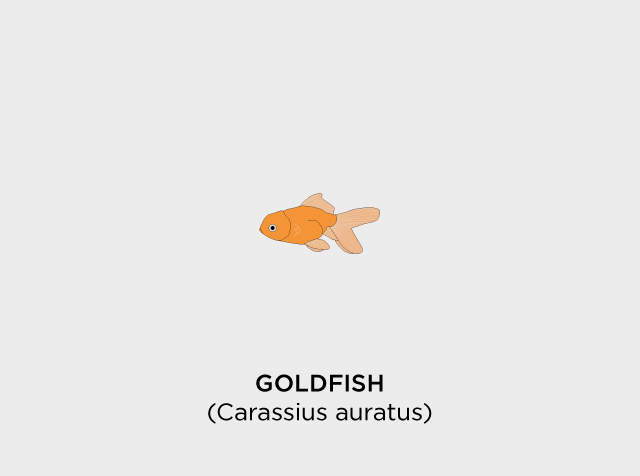 Before we go, consider the humble goldfish. Yes, New York waters contain goldfish, otherwise known as carp. How did they get in the East River, you might be asking? Possibly you! Or someone you know.

To be fair, many folks who release unwanted pet fish or dump aquarium plants in the river think they’re doing the right thing. It’s better than flushing them, right? Not exactly, as they can still spread diseases and parasites in the water. Feral goldfish are an invasive species, wreaking havoc when unleashed.

“The consequences can be pretty drastic if people release something that’s an invasive species with the potential to disrupt the ecosystem,” Cohen said.

Feral goldfish can grow quite large in the wild. Same goes for aquarium plants that can take over native species.

We know this sounds fanciful, but feral goldfish invasions in waterways are an absolutely for-real problem all over the world. “Monster Goldfish” have been caught weighing up to four pounds - the size of a football! 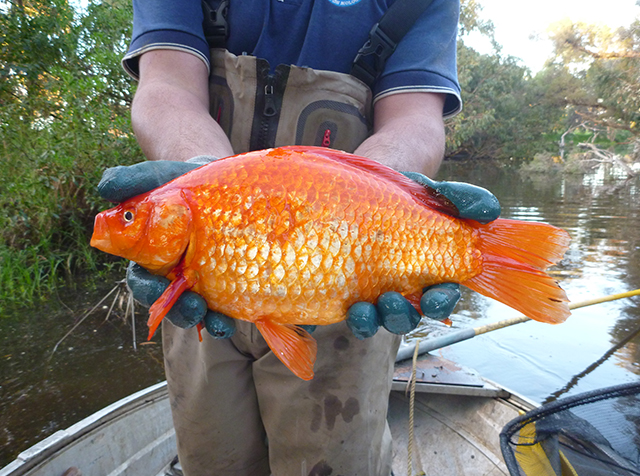 So check if you can give them back to the pet store, give them to a friend, or keep them. Anything but releasing them into any kind of body of water. Watch this video for more on pets that should never be released into the wild.

Clarisa Diaz is a designer and reporter for WNYC / Gothamist. You can follow her on Twitter @Clarii_D.

#east river fish
#fishing
#weird fishes
#original
Do you know the scoop? Comment below or Send us a Tip