Democratic State Senator Tony Avella announced his mayoral bid last weekend, outside of a Holiday Inn Express in Maspeth that's become a lightning rod for criticism of the city’s handling of homelessness. Maspeth residents have been protesting city efforts to house homeless families there since August, and Avella has been an outspoken supporter of their cause. This week, the Queens senator and former City Councilmember spoke to Gothamist about his belief that constituents will do the "right thing" if they feel like their government is giving them a choice—whether that be conceding to a new shelter, defending parking spaces against an onslaught of bike lanes, or giving President-elect Donald Trump the benefit of the doubt on immigration policy.

I thought we could start with some of your concerns about how Mayor de Blasio has dealt with the homelessness crisis, in Maspeth in particular.

Instead of trying to help these people, he is dumping them in every hotel and motel that he can find in New York. And, more often than not, putting them in places where they can't get services. They are out-of-the-way hotels or motels, and we're not helping them.

I hate to use the word "dumping," but that's what he's doing: putting homeless families and individuals in places that aren't appropriate. The Maspeth situation is an example of dumping them in neighborhoods without any notification and without any involvement. And I think that's wrong.

You were on Brian Lehrer earlier this week, and a caller said she was concerned about your use of the word "dumping." She accused you of belittling homeless New Yorkers. Do you stand by the word choice?

So, how would you address homelessness differently?

I believe there should be more involvement with neighborhoods. And this goes to a larger issue about my campaign: my favorite expression is, "Nobody knows their block like the people who live there." We should start listening to them, and what their needs are. I think the people, at the end of the day, will always do the right thing.

And you think the right thing would be new shelters?

I think people will be more receptive and actually suggest locations if they are involved in the process. It's when you have this dictatorial attitude that people say, “Why should I work with you? You are forcing me to do something without involving me in the process."

In Maspeth, the vast majority of protesters have been white. This brings us back to your point about asking people in neighborhoods what they want. That could be interpreted as a classist and racist stance.

I find it annoying that that even comes up. It has nothing to do with people's perceptions of a racial overtone. It has everything to do with the fact that people should have a voice in their own government. I mean Queens is the most diverse county in the country.

But still, Maspeth is overwhelmingly white.

Yeah, but look at the Pan Am Shelter. The overwhelming number of people protesting that shelter are not white. So how do you use that argument?

The strategy that has failed is forcing developers to put in affordable housing components. They don't want to do that. There is no money in there for them. So what you have to do in effect is give them greater density, and that causes overdevelopment.

The city is going to have to put its own funding into affordable housing. This way, the city can set the rates for each particular neighborhood. Because part of the problem is, when you force developers to do it, you base your calculation on the Area Median Income. Unfortunately, the AMI includes the wealthier neighborhoods of Nassau and Westchester. So it artificially inflates what would normally be categorized as affordable housing.

You're a big proponent of the two-percent property tax cap. Do you think you could still shore up enough capital funding to build affordable housing?

Well, part of it is also looking for other sources of revenue, without taxing people. One of the things I have pushing for a decade is legalizing sports betting. That money could go for affordable housing, for education, for mass transit. 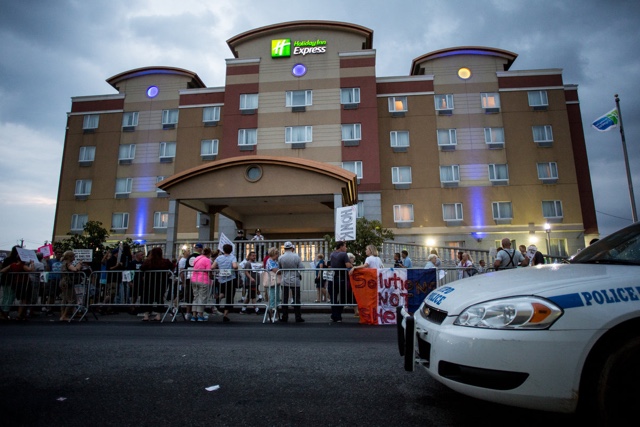 Protesters outside of the Holiday Inn Express in Maspeth in August (Scott Heins / Gothamist).

You're skeptical of Mayor de Blasio's Vision Zero initiative. Do you think there's a better way to approach street safety?

I think the mayor is sort of anti-motorist with his policies, there is no question. Vision Zero: what does that mean? All he is focusing on is the pedestrian plazas and bike lanes. And I've told him time and time again that if you really want to improve safety, you need to do more than that. It's also about making it easier for neighborhoods that identify dangerous intersections to get an all-way stop or a traffic light. If a neighborhood asks for a speed bump, do you know how long it takes?

The Department of Transportation says more people are biking in NYC than ever before, and that streets should be redesigned with their safety in mind.

Buying a car, having a car, is the last bastion of freedom. You get in your car, you can go anywhere you want at any time you want. It's not like, "You know what, I'm not going to buy a car. I'm just going to use mass transit." There's a lot of areas in the city of New York that are a mass transportation desert. People are still going to drive. That's reality. So you have to deal with motorists.

What about people who don't have a car? Transit advocates have criticized Governor Cuomo, who appoints the chairman of the MTA board, for being slow to fund the MTA.

Trying to prevent further increases in the subway and bus fare would make it easier for people to live here. We definitely need a bigger input on the MTA Board, because we’re the biggest component of the MTA. Either the city of New York takes control of its own bus and subway system, or we increase the number of city representatives on the Board.

Back in January, Mayor de Blasio introduced his Brooklyn Queens Connector streetcar idea, independent of the MTA. Do you think it's viable?

I guess the mayor's never heard of this: it's a vehicle, that runs on a set route. It picks up passengers and discharges passengers. It's called a bus. Put a bus there. It will be a thousand times less expensive.

Mayor de Blasio has been adamant, since the presidential election, that he will defend the rights of undocumented New Yorkers, despite President-elect Trump's call to cut federal funding to so-called sanctuary cities. Do you agree with the current mayor on that front?

The city of New York cannot exist, period, without federal and state dollars. Let's see what the president says, and then make a determination if it's something we can or cannot live with. At this point, he's already backtracked on some of the things he said on the campaign. Let's see what he says.

Do you have a message for the thousands of undocumented New Yorkers who would be threatened if Trump seeks to follow through on some of his promises?

As mayor, I would do what every mayor, regardless of being Democrat or Republican, since Koch has done: sign an executive order assuring them free services without questioning their citizenship.

But when it comes to dealing with Immigration and Customs Enforcement?

Again, let's see what he says. This is all speculation at this point.

This interview has been edited and condensed for clarity.

#bike lanes
#bqx
#homeless crisis
#queens
#tony avella
#original
Do you know the scoop? Comment below or Send us a Tip