Medical Examiner Still Keeping Brains Of Deceased Without Prior Notification

The city's Office Of Chief Medical Examiner is again under scrutiny for mishandling the organs of the dead. According to the Post, hours after a Crown Heights mother buried her infant son on May 4, she received a call from the ME's forensic pathologist telling her that they were in possession of his brain. "She said, 'Oh, I forgot to tell you the brain was missing," Cindy Bradshaw said. "I was really shocked…she said that like she had known me for many years and we were having a casual conversation."

As the report notes, this is at least the fourth time that a person's brain has been kept by the ME's office without notifying the families of the deceased. In 2010 a group of schoolchildren saw the brain of their classmate on a field trip to the Richmond County mortuary. In that case, the family won a $1 million jury award against the city.

Bradshaw is also planning on suing: "Someone's not doing their job," she says. Her attorney adds, "Despite prior incidents, prior lawsuits, changes in protocols, and exposure about these events in the press, it amazingly still continues to occur." The ME's office instituted a policy in 2010 to notify families if their relatives' brains were removed and kept.

And we get that this story was an exclusive for the paper, but was this graphic on the Post's website, with its comic-book "EXCLUSIVE" exclamation and cartoon brain, really necessary? 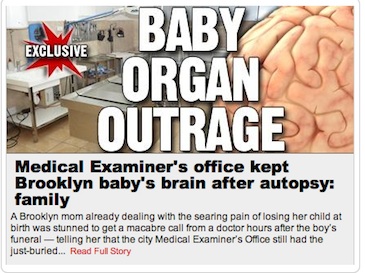