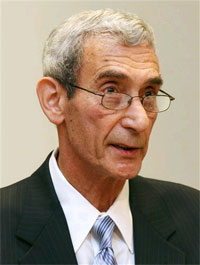 Dr. Charles S. Hirsch is the chief medical examiner of New York City and has overseen the autopsies on more than 100,000 people. He would probably remain a mystery to most New Yorkers, if it weren't for his ruling on the death of Det. James Zadroga, who worked clean-up at Ground Zero after September 11, 2001.

Hirsch said that Zadroga's death wasn't related to Ground Zero dust, but ground-up pills the detective was allegedly injecting. Two other pathologists - including Dr. Michael Baden, probably best known for his HBO autopsy-mystery series - had ruled that Zadroga's death was due to exposure to the harmful dust emanating from Ground Zero. The detective was awarded a disability pension and the September 11 Compensation Fund gave his family a substantial award upon his death.

Zadroga's father went to the the NYC's ME with his son's medical records, in an attempt to have his son counted on the city's list of 9/11 victims. But Hirsch recently determined that was not the case, and said "with certainty beyond doubt" that Ground Zero dust was not the cause of Zadroga's death, leading Mayor Bloomberg to say Zadroga was not a hero and then take it back and apologize to his family.

The Times spoke to other pathologists who all respect Hirsch but would hesitate to use such unequivocal language in their rulings. And the Times article included a small aside: "Detective Zadroga was at ground zero in the weeks immediately after 9/11, though it is not clear exactly where he worked or how many hours he remained on the site." Another police officer, Ceasar Borja, was previously heralded as a fatal victim of toxic Ground Zero, but it was eventually revealed that he spent virtually little time near Ground Zero.

Today, the Daily News reported Dr. Hirsch wouldn't even review the case of Officer James Godbee, who died from a heart attack in 2004. (The city says that anyone who died in the 9/11 attacks or from effects directly experienced on that day should be considered a homicide victim.) Officer Godbee arrived on the scene at 9/13/01, and died from a heart attack determined to be brought on by sarcoidosis, a disease that inflames the lungs and other organs. Earlier this year, the ME's office did declare that a Staten Island woman, who was at the World Trade Center on September 11 and later died of sarcoidosis, was a victim of the attacks.