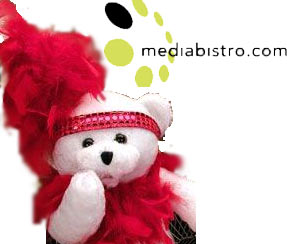 Never has a feathered boa'd media cocktail party hostess looked so good. Mediabistro.com, the media and creative job listing website, was sold to Jupitermedia for $23 million, according to the NY Times. Jupitermedia will be paying $20 million in cash, then $3 million over two years, and Mediabistro.com founder Laurel Touby will be staying on a senior vice president. Jupitermedia also has job listings sites, in addition to their information and content offerings.

Touby told the Times, "This company is a true Internet success story. This started as an offline community, a cocktail party, that turned into this Web site that actually makes money." And the impatient, take note: Touby founded the company in 1996.

Via the Media Mob, who puts it "Laurel Touby has sold her media gossip/bulletin board/media YMCA superstructure for a lot of money...Now it is time to die." And Gawker reported that Touby was looking for a sale in the range of $25 million last November and revealed Touby's email to rejected candidates applying to be her assistant in February.

Extra Extra: Here's a video of a rat crawling on a subway snoozer

Because this rat is even bolder than most, here are your end-of-day links: Ozy attempting a comeback, Donald Trump had some nice words about the SOTU speech, the men of Real Housewives and more.