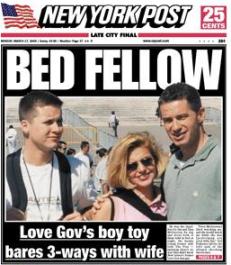 Former NJ Governor James McGreevey confirmed that he, his now ex-wife and a former aide had threesomes together. McGreevey sent an e-mail to the Associated Press, "This happened, this happened in the past, and now we need to move on with our lives."

Yesterday, former aide Teddy Pedersen, 29, claimed that he, McGreevey and Dina Matos had threesomes together when the couple was dating (McGreevey was mayor of Woodbridge, NJ at the time) up until McGreevey was elected governor. Pedersen feels Matos is hypocritical, claiming to be the victim when she was party to these menage a trois affairs.

Matos's divorce lawyers had subpoenaed Pedersen for her divorce case, which claims McGreevey committed fraud when asking Matos to marry him, the Gay American that he is. Naturally, Matos denies the threesomes; in an e-mail to the AP, she says Pedersen's story is "completely false." The AP gets the best e-mails!

For his part, Pedersen told the Star-Ledger he didn't know whether McGreevey was gay at the time, "I had heard the rumors in circles outside of work. In hindsight, there might have been light interest (in me), but it didn't seem like he was gay. It did enhance their sexual relationship having me be a part of it."