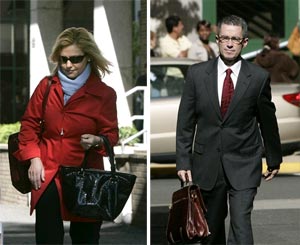 Former NJ governor James McGreevey was on the witness stand during his drawn-out divorce trial and said he relies on his boyfriend, a wealthy financier, to help him pay alimony to his first ex-wife as well as his currently estranged wife, Dina Matos McGreevey.

Matos McGreevey's lawyer is trying to prove McGreevey can pay alimony, but he has been claiming his stunning fall from the NJ Governor's Mansion--by way of admitting a gay affair and his homosexuality--has left him broke and unemployable. That's why he owes boyfriend Mark O'Donnell $250,000 in "rent, taxes and legal bills," according to the Star-Ledger.

McGreevey said, "Without Mark's... without these loans, I could not afford legal fees. They are crushing. I want to pay my child support. I want to fulfill my obligations. It's incredibly frustrating." His only sources of income are an adjunct professorship and some consulting; he's also a seminary student.

While McGreevey says it will take him "decades" to pay back his debts, he and O'Donnell live in a Plainfield, NJ mansion designed by Frederick Law Olmstead of Central Park and Prospect Park fame. McGreevey has been crying poor ever since last year, when he asked Matos McGreevey, who made $82,000 as a hospital administrator, for alimony (she'll be out of a job soon, as her hospital is being closed). The couple has already agreed upon custody of their daughter Jacqueline; after the alimony is worked out, then the divorce trial will focus on McGreevey's homosexuality.

#alimony
#Dina Matos McGreevey
#divorce
#james mcgreevey
#nj
Do you know the scoop? Comment below or Send us a Tip