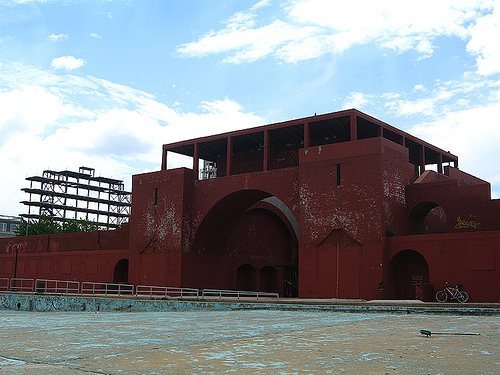 That big empty cement pool in Greenpoint has become a landmark. The recently rejuvinated (but still dry) McCarren Park Pool was designated such by the Landmarks Preservation Commission yesterday morning.

McCarren was the 8th of 11 huge pools built by the Works Progress Administration, it was opened in 1936 with a dedication ceremony on July 31st of that year (making it the ripe old age of 71 in a few days). With an original capacity for 6800 swimmers, it was designed by Aymar Embury II - who worked on many commissions from the City of New York during the controversial Robert Moses era. Two of the other pools from that summer, The Sunset Park and Thomas Jefferson in East Harlem, were also designated landmarks yesterday.

Looking ahead, what does this mean for concert-goers and the $50 million Bloomberg recently announced would go towards restoring the pool? The Department of Parks and Recreation is currently holding community talks about the future. Any design changes, now that it's a landmark, will have to go before a commission. Some ideas for how the pool should be used from a community meeting last month included: a sandy beach, a skate park, a place to kayak and, of course, a pool. We think they should make more movies like this one there.

The LPC answers questions about landmarked buildings here, including what sort of changes can be made to one.