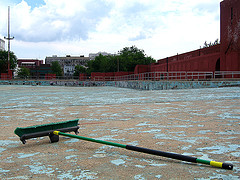 McCarren Park Pool is getting a $50 Million makeover. Do you have a before and after image in your head? Well the NYC Parks Department wants your opinion as they ponder the design and future programming of the pool. Take their survey here.

The OSA (Open Space Alliance) has been working with the Parks Dept and between two community planning sessions, surveying at a concert and at McCarren's track & field they have surveyed 500 people. They also have their own outlet for your opines available online here. Those looking for more concerts will be disappointed to learn that this summer will likely be the last of the pool parties - the NY Press reports:

The mayor’s money has pool advocates confident that these large, loud concerts will soon be a thing of the past. “It’s not going to be the concert venue that it is now,” notes Joseph Vance of the Open Space Alliance, an organization expected to partner with the Parks Department for the renovation and subsequent administration of McCarren Pool. “There will be a pool with water in it,” he adds.

The Parks Department has indicated their commitment to this as well. “We always had concerts as an interim activity until we could reconstruct the pool,” said Parks spokesman Philip Abramson. The Parks Department also declined Clear Channel’s interest in a multi-year lease at McCarren. At the moment, both the Clear Channel and Jelly NYC contracts are only through this summer.

The pool was landmarked last month and certain things will thankfully need to stay preserved, such as the bathhouse and entry arch. There must also be a pool and a year-round recreation center. Other than those rules, anything that money can buy - can be done. So how do you want to use the pool?