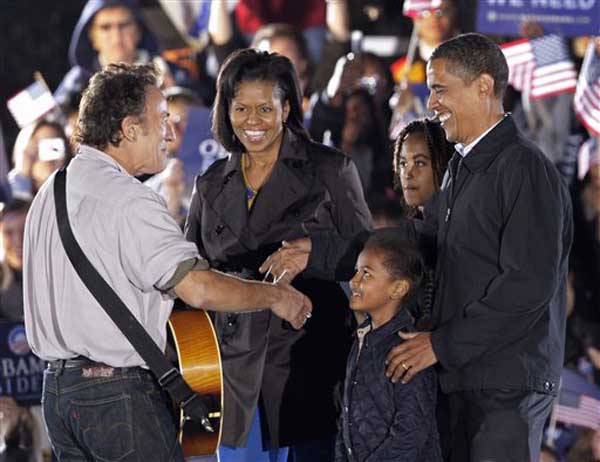 After months and months (practically years) of politicking, Senators John McCain and Barack Obama are entering the final hours of their presidential campaigns. Both candidates visited battleground states over the weekend in hopes of ensuring a victory tomorrow.

Last night in Cleveland, Obama was joined by Bruce the Musician--Bruce Springsteen performed at a rally, who mentioned how he campaigned for John Kerry, "I was here a while back, in 2004... I'm glad they let me come back. They didn't think I might jinx them or something." The Boss performed Youngstown (video after the jump). 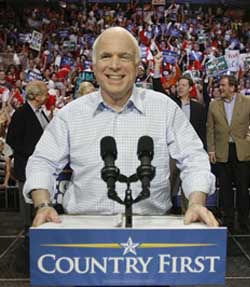 Polls suggest that Obama is still leading: ABC News/Washington Post poll says he has a 54-43 lead over McCain; the Wall Street Journal/NBC News says Obama has a "solid, though narrowing, lead" of eight points; and CBS News finds a Obama has a 13 point margin over McCain among likely voters.

Still, McCain is reportedly enjoying himself at the end of the campaign--happy it's almost over and happy not to be counted out. According to the NY Times, "He is also buoyed — and obsessed, his staff says — with polls that show the race tightening in some battleground states and allow him hope that he might still have a shot." On the Obama side, his campaign staffers aren't taking anything for granted--they are resorting to superstitions as well as strategy!

McCain has a full day today: He's started with a midnight rally in Miami, then heads to Tampa. Then he'll go to Tennessee, Pennsylvania, Indiana, New Mexico and Nevada. Politico reports, "Running mate Sarah Palin will spend Monday making stops in Ohio, Missouri, Iowa, Colorado, Nevada. She'll end her day in Alaska, ready to cast her ballot on Election Day." Democratic vice presidential candidate Joe Biden will be Missouri, Ohio, and Pennsylvania today. Obama will be in North Carolina, Florida and Virginia today and then will head to Chicago tomorrow. You can see their schedules here.

And tonight, both McCain and Obama will be interviewed, in pre-taped segments, by ESPN's Chris Berman during Monday Night Football. The interviews will air during halftime.