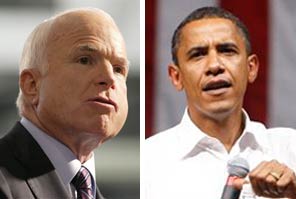 If it's the presidential election, it means that we are all going to be beaten down by the outrage, both imagined and real.

Earlier today, Barack Obama belitted John McCain and Sarah Palin's attempt to seize the "change" mantle from him, saying, "You can put lipstick on a pig, it's still a pig. You can wrap an old fish in a piece of paper called change. It's still gonna stink."

In response, the McCain-Palin camp said, "Barack Obama's comments today are offensive and disgraceful. He owes Gov. Palin an apology," perhaps thinking about Palin's much quoted joke about hockey moms being like pitbulls with lipstick.

The Washington Post reported that in spite of McCain referring to Hillary Clinton's health plan with "I think you can put lipstick on a pig, but it's still a pig" just last year, former Massachusetts governor Jane Swift--head of the "Palin Truth Squad"--"took extreme umbrage":

"Calling a very prominent female governor a pig is not what we want," Swift said, describing Obama's comments as "offensive."

Four reporters were allowed to pose questions on the call, and three of them were from women who asked, with obvious incredulity, whether Swift honestly believed that Obama meant to literally compare Palin to a kind of livestock. When one reporter asked Swift why she assumed the remarks were directed at Palin, Swift replied: "It seemed to me a gendered comment. There's only one woman in the race."

"As far as I know, she's the only one of the four -- the presidential and vice presidential candidates -- who wears lipstick," Swift said.

Is it too far-fetched to think that today's the Wall Street Journal article, which says that Palin's claims she was against the Bridge to Nowhere are contradicted by her record, was written by two women in order to avoid accusations of sexism?

Speaking of offensive, the McCain campaign released an ad claiming that Illinois State Senate legislation Obama voted for teaches "comprehensive sex education" to kindergartners. As McClatchy Newspapers explains, "This is a deliberately misleading accusation... the legislation allowed local school boards to teach 'age-appropriate' sex education, not comprehensive lessons to kindergartners, and it gave schools the ability to warn young children about inappropriate touching and sexual predators."

Obama spokesman Bill Burton said, "It is shameful and downright perverse for the McCain campaign to use a bill that was written to protect young children from sexual predators as a recycled and discredited political attack against a father of two young girls. a position that his friend Mitt Romney also holds. Last week, John McCain told Time magazine he couldn’t define what honor was. Now we know why."

#barack obama
#campaign
#election 2008
#john mccain
#sarah palin
Do you know the scoop? Comment below or Send us a Tip