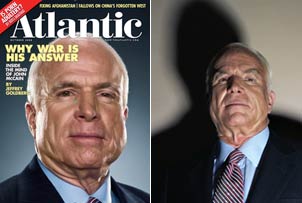 Photographer Jill Greenberg tricked John McCain into allowing her to shoot him in an ominous, unflattering light that created a diabolical image of the senator. After taking the cover shot for this month's Atlantic Monthly, Greenberg (who owns the domain Manipulator.com for her web site) asked the candidate to come over to another setup where she had previously placed a strobe light below where McCain now stood and captured him with an eerie shadow.

Greenberg has been very open about the deception and said of the actual cover portrait, "I left his eyes red and his skin looking bad."Atlantic Monthly is not happy with Greenberg flaunting her manipulation. An editor from the magazine said, "Her behavior is outrageous. Incredibly unprofessional." That prompted Greenberg to fire back, "Some of my artwork has been pretty anti-Bush, so maybe it was somewhat irresponsible for them to hire me."

Over on Greenberg's web site, she has taken the evil image of McCain even further and photoshopped in blood red eyes, shark teeth and dripping blood. She says that "she has thought about putting that image on a billboard with the message that the candidate is a bloodthirsty war monger."

“We stand by the respectful image of John McCain that we used on our cover, and we expect to be judged by it. We were not aware of the manipulated and dishonest images Jill Greenberg had taken until this past Friday.

When we contract with photographers for portraits, we don't vet them for their politics--instead, we assess their professional track records. Based on the portraits she had done of politicians like Arnold Schwarzenegger and her work for publications like Time, Wired, and Portfolio, we expected Jill Greenberg, like the other photographers we work with, to behave professionally.

Jill Greenberg has obviously not done that. She has, in fact, disgraced herself, and we are appalled by the manipulated images she has created for her Web site of John McCain.”

#atlantic monthly
#jill greenberg
#john mccain
#photography
Do you know the scoop? Comment below or Send us a Tip