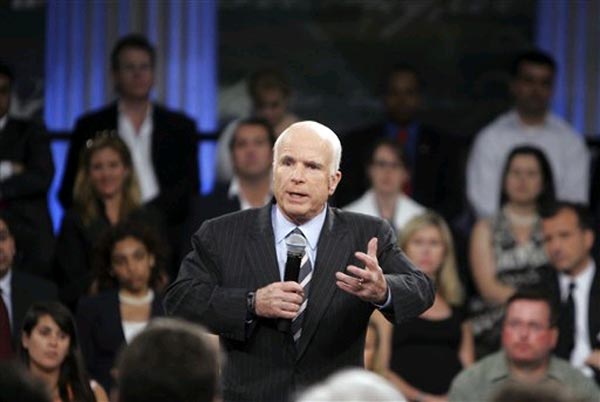 While plans for a joint John McCain-Barack Obama town hall forum at Federal Hall in lower Manhattan fell through, McCain still appeared and took advantage of being the only presidential candidate there, saying, "It would have been a little more interesting tonight if Senator Obama had accepted my request."

Obama's excuse was that the town hall happened too soon after Obama clinched the nomination, and about 200 people gathered for the just-McCain not-open-to-the-public event. Though the event was billed as bipartisan, it turns out that tickets were distributed by "supporters, 'independent groups,' and Mayor Bloomberg" though it's unclear how that broke down. McCain, who does well with town halls (he's had over 100!) appeared to have a pretty easy time, discussing a variety of topics and even getting a chance to respond to one question with, "I don't consider myself a hero."

At one point, McCain spoke out against the oil industry, "I am very angry, frankly, at the oil companies not only because of the obscene profits they've made but at their failure to invest in alternate energy to help us eliminate our dependence on foreign oil." At another, he said that the Democrats were being ageist and used his appearance on Saturday Night Live as some youth street cred--on the show, "I said the primary qualification to be president of the United States is to be very, very, very old."

McCain has asked Obama to appear at 10 town hall appearances during the summer. The AP has some pros and con of town halls for both candidates.

#barack obama
#election 2008
#federal hall
#john mccain
#politics
#Town Hall
Do you know the scoop? Comment below or Send us a Tip