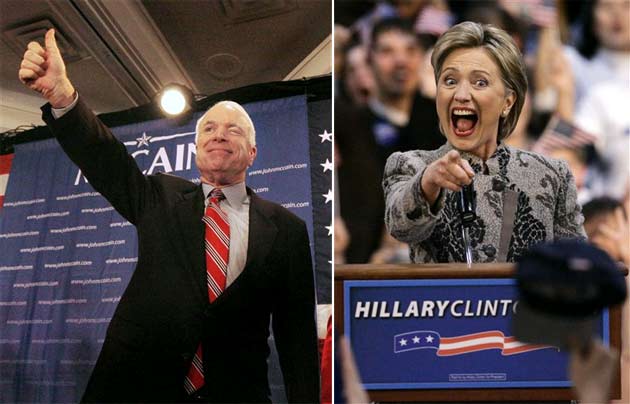 Senator John McCain won the Republican primary in New Hampshire, with the race being called for him early on. Senator Hillary Clinton beat Senator Barack Obama by a few thousand votes in a very close race. Comebacks all around!

Update, 11:06PM:
During her victory speech, Clinton thanked the voters of New Hampshire and asked them to give the country the comeback it needs. Unlike her Iowa background of friends like Madeline Albright and Wesley Clark, this time Hillary is standing in front of supporters (most of them the young).

Also, based on our rudimentary lipreading skills, it looked like Bill Clinton told her, "I'm really proud of you, I really am." 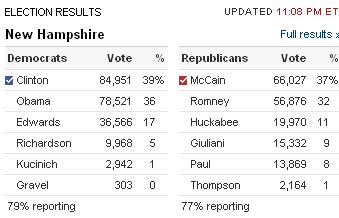 Update, 10:30PM:
NBC News is projecting Clinton will win. Was the emotional plea the big boost?

CNN projects Clinton's win as well, as does ABC News and CBS News. So, besides the crying thing, the big news is that the polls, showing Obama would win (if by a slight margin), were wrong.

Update, 10:00PM:
McCain gave his victory speech (MSNBC's Chris Matthews wasn't too happy about him reading the speech, but gave him props for overcoming so many trials) and noted that he was too old to be called "kid" no matter the adjective, “Tonight we sure showed them what a comeback looks like.” His supporters and staffers were amazed the race was called so soon; his media adviser Mark McKinnon told Politico's Jonathan Martin, "In the darkest days, he was always the guy who said 'soldier on.'"

Romney noted that he got the silver medal again, Mike Huckabee was thrilled with his third place finish, and Giuliani left NH and headed for Florida.

Clinton and Obama are separated by thousands of votes.

8:30PM: It's a hot night in cold New Hampshire: Various media outlets are calling the Republican primary for John McCain while Democrats Hillary Clinton and Barack Obama are fighting it out for first. And 15% of the precincts are reporting!

Clinton is leading Obama by a few points. John Edwards looks likely to place third in th Democratic primary while Mike Huckabee will be third for the Republicans. Rudy Giuliani looks like he'll be in fourth, but if Ron Paul ekes out over him, that'll be humiliating - especially given how many events he's had there. Overall, turnout seems to be at record levels.

We'll have more updates later. In the mean time, check out CNN's interactive about what's at stake in NH, how Obama staffers are annoyed at Clinton's mention of Martin Luther King Jr., and ad spending in NH.