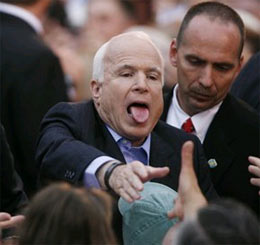 The Times had published an article about how McCain campaign manager Rick Davis "was paid more than $30,000 a month for five years as president of an advocacy group set up by the mortgage giants Fannie Mae and Freddie Mac to defend them against stricter regulations." Yesterday, campaign adviser Steve Schmidt said, "Whatever the New York Times once was, it is today not by any standard a journalistic organization...This is an organization that is completely, totally, 150 percent in the tank for the Democratic candidate, which is their prerogative to be... It is a pro-Obama organization that every day attacks the McCain campaign, attacks Sen. McCain, attacks Gov. Palin and excuses Sen. Obama.” Schmidt's suggestions for potential Obama stories fell flat, though.

Times executive editor Bill Keller said, "The New York Times is committed to covering the candidates fully, fairly and aggressively. It's our job to ask hard questions, fact-check their statements and their advertising, examine their programs, positions, biographies and advisers." Politico has an article on McCain's love-hate relationship. Former Times reporter Todd S. Purdum said, “I don’t think that kind of statement represents anything like John McCain’s true views about The New York Times, and I don’t think it represents Steve Schmidt’s real views, either. I think the McCain camp is frustrated with the current climate, and with the tough coverage of its sharp tactics, and is blaming the messenger – the oldest trick in the book.”

But speaking of the McCain-Palin campaign and the media: During VP candidate Sarah Palin's meeting with Afghan president Hamid Karzai, the media only got 29 seconds access, hearing only Palin and Karzai talk about Karzai's son's name. That came after the McCain-Palin camp was going to bar the media...only to let them in after protest.

#barack obama
#election 2008
#john mccain
#media
#ny times
#sarah palin
Do you know the scoop? Comment below or Send us a Tip
A new Gothamist is coming! We’ve moved comments over to our beta site. Click here to join the conversation and get a preview of our new website.