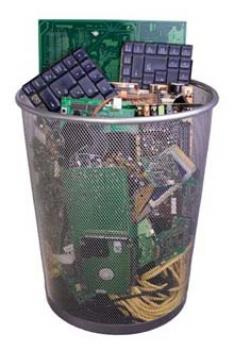 The City Council may have passed an electronics recycling law recently, but Mayor Bloomberg says it's lame and illegal!

The bill requires electronics manufacturers to establish recycling programs for their products and establishes fines of $100 by 2010 for people who throw their computers, printers or other electronics in the trash. Manufacturers will also be penalized $50,000 if they fall behind set recycling requirements.

The mayor said he would refuse to enforce such a law even if the Council does override his veto because it's "totally illegal," violating a "whole bunch of federal laws on Interstate Commerce." Bloomberg, who is generally in favor of recycling programs, thinks the City Council is making manufacturers responsible for consumer behavior beyond their control. He likened the idea to holding newspaper publishers financially responsible for readers who don't put their papers into recycling.

If the Council overrides his veto (the initial vote passing the bill was 47-3 in favor), odds are that the Bloomberg will just pretend it never happened and carry on as usual, the way he has with cell phones at public schools (he hates 'em, the City Council says kids can have their phones). Apple Computers actually supports the recycling plan, although most of the industry is dead set against it.