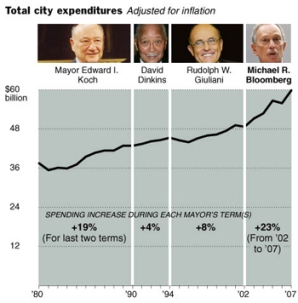 While no one is questioning the fiscal stability of New York City the way they were during the 1970s, municipal spending has nonetheless exploded during Mayor Bloomberg's five years in office, far in excess of anything his predecessors accomplished over the last three decades.

Thanks to swelling city revenues from the booming stock and real estate markets, New York remains on firm budgetary footing. The New York Times reports, however, that Mayor Bloomberg has overseen the greatest expansion in city government spending since Mayor John Lindsay, another Upper East Side Republican.

As the Times graphic (left) illustrates, New York City's budget (adjusted for inflation) increased 23%, to $60 billion, during Bloomberg's five years in office. This compares to:

We're marveling at how it took approximately 21 years, from 1981 to 2002, for the city budget to grow $12 billion to $48 billion. Mayor Bloomberg added another $12 billion to the budget in just five years. The growth in city spending came as Mayor Bloomberg has emphasized developing the city's information technology infrastructure and spending on quality of life projects like improving city parks. Increasing salaries for teachers, which grew 40% according to the Times, was another initiative favored by the mayor.

Just two weeks ago, Mayor Bloomberg personally sent a letter out to top aides and the heads of city agencies emphasizing strict fiscal discipline and a warning that belt-tightening may be necessary in the future. Unfortunately, 75% of the spending increases are in areas that will prove inflexible if paring back is necessary. Budget growth has been concentrated on employee healthcare costs and benefits, pension contributions, and Medicaid.

While most of the increase in city revenues that allowed the budget to grow so quickly was due to a growing city economy, additional funds were raised by Bloomberg's push to increase property taxes (which he later trimmed) and increased fees. One thing he was committed to was not cutting services during the lean times he inherited as mayor after 2001's terrorist attacks. The New York Post adds today that Bloomberg is quite generous with his own money, having donated $166 million in 2006. One project that benefited from his largesse that we found interesting: "A $9 million traffic-safety grant to fund two projects in Vietnam and Mexico. They are intended to cut pedestrian deaths."

Graphic from the New York Times