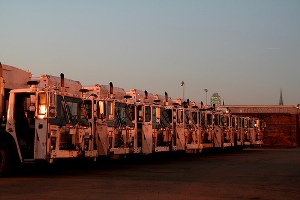 Mayor Bloomberg and City Council Speaker Quinn urged the State Assembly to pass a bill authorizing the marine transfer station at the Gansevoort Pier. The MTS, part of the city's Solid Waste Management Plan, would handle recyclable paper, metal, glass and plastic and would help to ease garbage truck traffic. Bloomberg said there would be "a disaster" if the plan doesn't pass.

Assembly members whose districts are affected by the plan, such as Richard Gottfried, Deborah Glick and Linda Rosenthal, believe there are other locations that would be better for the MTS. The Sun reports that Assembly Speaker Sheldon "West Side Stadium Killer" Silver thinks a plan putting the MTS at 36th Street is better, so who knows what will happen? But if the Assembly doesn't pass the plan, then the city has to rethink the entire Solid Waste Management plan.

Quinn, whose district includes the pier where the MTS would be located, surprised some constituents with her support for the plan. Yesterday, she said, "This recycling transfer facility will allow my district to do our part for this equitable and environmentally responsible plan, reducing truck traffic by 30,000 miles each year while providing educational space to our community. " The part about the plan being "equitable" refers to the fact that many lower income neighborhoods have garbage facilities in them (many politicians representing lower-income areas lauded proposals to put garbage transfer stations in neighborhoods like the West Village and Upper East Side).