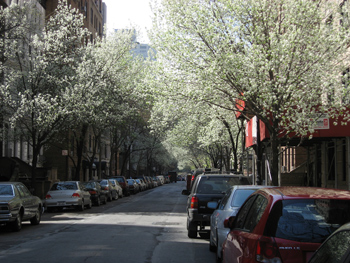 An ambitious plan to plant one million trees in New York is actually going to rely heavily, or primarily, on the the actions and funding of individual residents. On Earth Day back in April, Mayor Bloomberg announced one of many bold initiatives to make New York a greener city: plant a million trees by 2030. Bloomberg even said that $250 million would be devoted to the project over the next ten years to get it going. A closer examination of the details of the plan show that the project's goals are extremely backloaded, with most of the planting of trees by the city coming after 2017, and individual residents are expected to plant more than three trees for every one that the city plants in the next ten years.

The New York Sun notes that the $250 million earmarked for tree planting will go towards installing 15,000 new trees annually, or 150,000 in the next decade. City officials are now explaining for the one-million-tree mark to be met, city residents will have to buy and plant 500,000 new saplings themselves. Even if that ambitious goal were met, that would still leave 350,000 trees that needed to be planted over the next 13 years to reach 1 million trees by 2030. The city would have to nearly redouble its tree-planting efforts at that point, to a rate of planting 27,000 trees annually.

The Sun quotes Peter Kostmayer, the executive director of the nonprofit group Citizens for NYC, who voiced concerns about the ability to act locally. "I don't have a shovel, and I don't know where I'd plant a tree. How do you get people in Manhattan to do that?" It's not just a lack of knowledge that could be daunting. It costs $17,000 to plant a tree in Manhattan, according to the Parks Dept. And homeowners buying big saplings for their yards could spend as much as $1,000 a piece, according to the Sun.