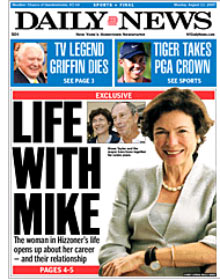 We've said before that Mayor Bloomberg's girlfriend (or companion, which is what the NY Times refers to her as) Diana Taylor seems like a classy lady, unlike some other mayor's girlfriends. But we don't know much about her, except that she went to Dartmouth (Mayor Bloomberg accompanied her on an alumni weekend there), she worked in senior management at Keyspan, she was the state's superintendent of banking under Pataki, she was shortlisted by President Bush to run the FDIC but then her nomination got nixed, and she was recently named to the Hudson River Park Trust.

In other words, Diana Taylor is a total mystery - at least to the information hungry public who loves to know things like the Mayor taking his SUV to the subway. Which is probably why the Daily News decided to put Taylor on its cover and feature the most details yet about her. Things we learned:
- She's a lot like the Baby Boom character Diane Keaton portrayed.
- She eats oatmeal and blueberries while being interviewed.
- She didn't realize that she was sitting next to Paul Newman during a dinner.
- She doesn't mind that Mayor Mike is often busy.
- She met Bloomberg in 2000.
- She was married for 6 years in her thirties (she's now 52).

Hmm, the News article is headlined "She's Not Just His Gal Pal", but the Daily Intelligencer notices the News "has called her that at least sixteen times since 2002." We imagine this is the News' way to introduce Taylor the public as First Lady bait.

Also, Mayor Bloomberg waxes about his lady, telling the News, "What can I say? She's got beauty, she's got brains, she's got personality. She's sophisticated but down to Earth. She's one of those people who can do anything she sets her mind to."