Mayor Has Secret Meetings with Media Moguls on 3rd Term 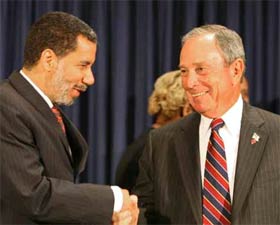 Instead of courting New York City voters with a ballot initiative or City Council with legislature to overturn term limits, Mayor Bloomberg first pitched the idea to another group: the owners of the three largest newspapers in New York. In what sounds like a storyline from The West Wing, the NY Times reports that Bloomberg has had private discussions with Rupert Murdoch (NY Post), Mortimer Zuckerman (NY Daily News), and Arthur Sulzberger Jr. (NY Times) about their respective newspapers' possible stances on a term limit overhaul. The Times source said that all three owners were open to the idea. "So it would be a clean sweep," the source told the paper. City business leaders like the newspaper owners were the ones who got the ball rolling on talk of finding a way for the mayor to remain in office for another four years.

Elsewhere yesterday, Governor Paterson publicly stated that he thinks a third Bloomberg term is "a great idea." Paterson was particularly gushy when it came to Mayor Mike's political ambitions adding, "There was a time he wanted to run for President. That wouldn't have been a bad idea, either." Paterson might be eager to endorse Bloomberg to stick around City Hall because it would keep the mayor from becoming an opponent to the governor in the 2010 election for the state house. Bloomberg has been speculated to be a possible candidate in that race as well and leads Paterson in polls of a potential square off.

As for the mayor, yesterday he certainly sounded like someone who doesn't want to go anywhere. After revealing Thursday for the first time that he wouldn't be against an extension of term limits, he continued to question just how long is too long for a mayor to be in office during his weekly radio program. He even revealed that he had discussed the idea with "one of the great mayors of this country" who he said would also be forced out by term limits, but refused to name. When asked if a third term was an option, Bloomberg responded, "Being mayor is the best job."