Mayor Has Plan for Governors Island 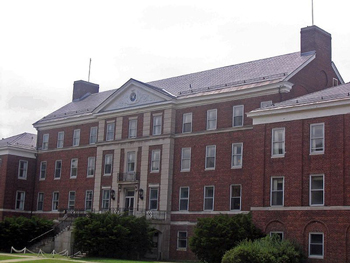 During his weekly radio address yesterday, Mayor Bloomberg proposed that Governors Island be turned into the site of a sprawling public health institute that he would bankroll with funds from his own private foundation. After the city bought the island for $1 from the federal government several years ago, the former military site and Coast Guard station has been relatively underutilized. Bloomberg's plan envisions an institute that would draw health experts from around the world to work off the southern tip of Manhattan.

According to the Daily News, the Mayor's private foundation has been scouting the world for a site for a public health institute, where scholars and students could gather to research and discuss global health threats. Recently, and perhaps because of its proximity, Governors Island has become the center of his attentions. The city solicited ideas on what to do with the park in the harbor, but "got essentially nothing." In June, a critic at The New York Times described the proposals as lacking ambition.

Bloomberg estimates that his plan for a public health institute on Governors Island would cost $100 million initially and then $20 to $30 million annually to operate. An official at the island's oversight organization said that a health center could be a good fit and that they'd be happy to meet with representatives from Bloomberg's foundation.