Mayor Doesn't Speak Publicly On The Day Of A Funeral 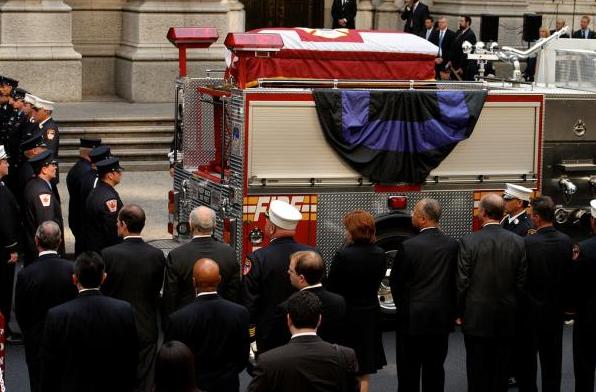 The Post and Daily News have a number of editorials and columns about the Deutsche Bank building fire response and fallout. The Post continues to demand FDNY Commissioner Nicholas Scoppetta's resignation and faulted Mayor Bloomberg for standing by Scoppetta. The Daily News' Juan Gonzalez wonders why Bloomberg and Scoppetta have gone into "virtual hiding" and blasts Bloomberg for sending lobbyists to kill "legislation that would force tougher enforcement of safety laws by the city Buildings Department." The News also has an editorial saying that Spitzer must take charge (he "has the muscle to crack heads among the contractors and federal, state and city agencies that have made a perilous hash of the job").

When Mayor Bloomberg went to St. Vincent's to check on the two firefighters injured at the Deutsche Bank building yesterday, Jeremiah's Vanishing New York caught this exchange between the Mayor and reporters:

Bloomberg breezed right by without a word, sending the media and onlookers into a frenzy. One angry man waved the New York Times in the air and shouted, "Who is John Galt? Who is John Galt?" quoting the Ayn Rand line and referring to the mysterious "corporate entity" that was hired to dismantle the Deutsche Bank Building.

After Bloomberg zoomed away in his big Chevy Suburban, his PR guy (called a "lapdog" by one of the irate journalists) said that the mayor never speaks publicly on the day of a funeral, meaning the funeral for firefighter Graffagnino of the Deutsche Bank fire. "Is the firefighter with the head injury alive?" one of the journalists asked. The PR guy wouldn't say, instituting what another newsguy grumblingly called a "24-hour blackout."

The subcontractor hired to do the Deutsche Bank demolition, John Galt Corporation, was found to be basically a shell company. Though contractor Bovis terminated John Galt's work yesterday, there were still John Galt workers on the scene and one lost control of a 300-pound jackhammer that fell from the 23rd floor and injured firefighters.

Today, Firefighter Robert Beddia was remembered at St. Patrick's Cathedral. Here's a report from the NY Sun, video from the Staten Island Advance (Beddia lived on SI), and photographs from ~Raymond.

Photograph of Bloomberg, Spitzer, and Scoppetta (from far left) with other city officials, such as City Council Speaker Quinn, by ~Raymond on Flickr