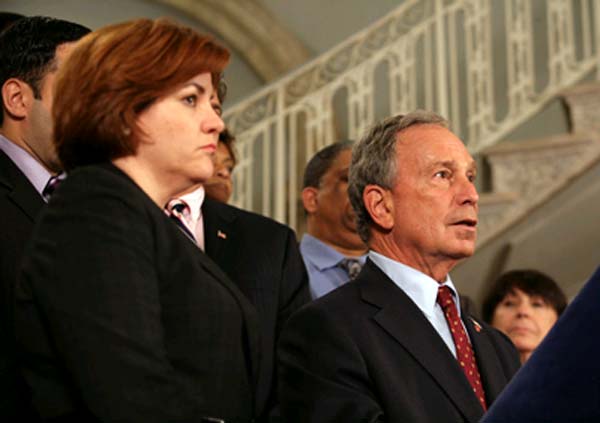 Last night, Mayor Bloomberg and City Council Speaker Christine Quinn announced that the new $59 billion budget (for the 2009 fiscal year, which starts on July 1) will keep the $400 property tax rebate program for homeowners for a fifth year and increases funding to the Department of Education by $129 million. Still, other sacrifices were made as Bloomberg said, "The news about the economy, and its effects on the City's finances, continues to be very sobering, and this budget reflects the uncertain economic outlook we face."

For instance, the Daily News explains the "school funding came at the expense of money the Council traditionally funnels to library services, cultural affairs, legal aid, seniors and other government services." That prompted criticism from City Councilman Charles Barron ("This stinks. The mayor should be ashamed of himself. He's pitting education against seniors") and City Councilman Bill deBlasio ("I am disappointed that with a $4.5 billion surplus, the mayor forced the Council to cut funding for essential services.").

The Council of Senior Centers and Services' Bobbie Sackman expressed her worries to the Post, "We just lost a total of about $1 million for food and rent money, base costs, for senior centers. And food? How can you cut back food for seniors when food prices are increasing?"

City Council Speaker Christine Quinn said, "We had to make tough choices about cutting back spending to make sure that we would fulfill our core obligations to New Yorkers." Of particular note, as the investigation into the Council's slush funds continues, the Council's discretionary spending was cut from $352 million to $232 million.