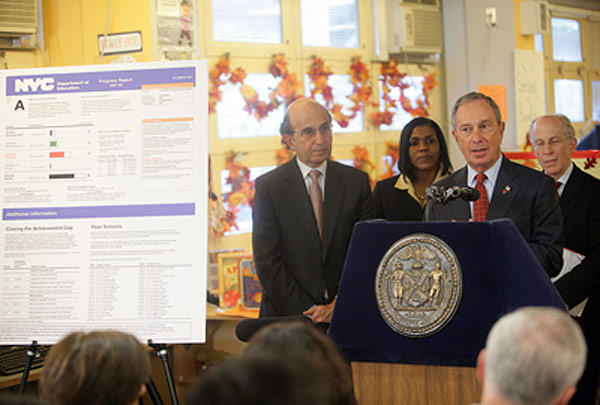 Mayor Bloomberg and Schools Chancellor Joel Klein released the 2008 progress reports for elementary, middle and K-8 schools (1,043 in total). Bloomberg happily noted that 58% of schools moved up a letter grade (or received an A for a second year in a row), "I am thrilled that the majority of schools earned a higher grade by improving performance over the past year. Now we've got to keep that progress going."

Some stats from the Department of Education:

Of course, some critics are unhappy with the grading system, calling it complex and arbitrary. As the NY TImes reports, "Nine of the schools that got F’s for the 2006-7 school year got A’s in this year’s grading; just one of last year’s A’s plummeted to an F this time around...wild fluctuations [seen] as proof that the system was flawed because of its emphasis on year-to-year progress by individual students rather than multiyear gains." And two schools on the state's list of failing schools got A's.

A big chunk--85%-- of the report card is made up of test scores and students are graded on their year-to-year progress, versus proficiency, leading an education professor at Boston College to tell the Times, "I would say that what they are doing is clearly misguided. These are showing dramatic changes that can have nothing to do with what is actually happening.”

In fact, the Sun reports that I.S. 289 in Battery Park City got a D last year, but the principal made no changes, instead focusing on "a battery of internal assessments that look not just at test scores but also science reports, writing samples, and math projects." This year, the school received an A.