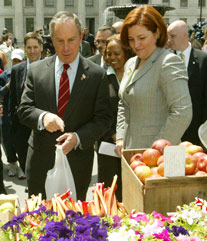 In a feature that focused more on his potential as a national leader, Newsweek dropped a previously unknown bit of information about Mayor Bloomberg:

In a city noted for smoky pubs and greasy spoons, the mayor banned smoking in bars and small restaurants and the use of trans fats in eateries. (Bloomberg had two coronary stents put in before he became mayor; an associate, who didn't want to be named discussing Bloomberg's medical status, says his health is excellent.)

Heart surgery? Who knew? NY1 followed up by revealing a doctor had recommended the stents be placed after Bloomberg experienced "discomfort and fatigue." The billionaire recovered quickly and has not had heart disease since the surgery.

We wonder if Bloomberg considered running for Mayor before or after the surgery. At any rate, the Mayor does refer to his diet from time to time (though he does imbibe on junk food like stadium concessions at sporting events occasionally) and it's certainly easy for a wealthy man to make sure he's eating the right things. There was also that time he implied diet guru Dr. Robert Atkins died because he was fat, not because he fell on a sidewalk. When you look at the Health Department's "Healthy Heart" information, the phasing-out of trans-fats is front-and-center.