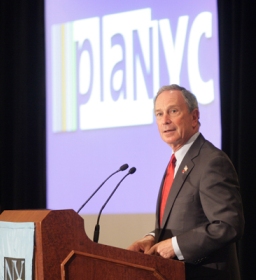 The NY Times notes how after his visits to churches in Brooklyn, Queens and Harlem, Mayor Bloomberg "cast the possibility of missing the deadline in stark tones" while speaking with reporters. He implied that other big transit projects, like the Second Avenue subway, bus expansion plans, and JFK airport-downtown Manhattan rail link, could be jeopardized and that other businesses might leave if congestion pricing is not passed.

Congestion pricing supporters and opponents both held a press conferences at City Hall yesterday. Supporters questioned why the state wasn't willing to take the $537 million to better the air and mass transit. Opponent State Senator Ruben Diaz of the Bronx said, "Who is going to show me that the people in the South Bronx suffering from asthma will not be suffering after the mayor's plan?" while Assemblyman Richard Brosky said there isn't enough support for the plan, "No one is going to get bribed into accepting a bad idea."

The State Senate drafted a bill on Friday to help usher congestion pricing through, and Governor Spitzer reportedly "onvened a last-minute negotiating session to try to finalize a deal " for congestion pricing and other lingering Albany issues. As it happens, Assembly Leader Sheldon Silver, widely seen as the man who is standing in the way of the plan (Senate Majority Leader Joe Bruno and Governor Eliot Spitzer support it), will be meeting with some Assembly members in Manhattan today while the Mayor is in Albany.