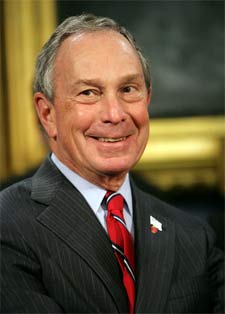 One of the many reasons why we're excited about the close of 2007 is the fact that Mayor Bloomberg will have to make a decision on whether or not to run for President. Because ever since speculation began about a possible Bloomberg third-party run (fueled by his leaving the Republican party for independent status), countless stories about a billion dollar presidential run have been mentioned non-stop. And his remarks during a press conference yesterday are only keeping us curious!

Yesterday, the Post reported that his aides had been "reaching out to consultants from his past campaigns about whether they are free for a possible 2008 White House bid." The consultants, including ones that crafted Bloomberg's mayoral election TV ads, have been asked for their future availability; one who was apparently going to work for Hillary Clinton's campaign was told "he should not sign up with another campaign and instead wait and see what happens with the mayor, the sources said."

When asked about the Post story, Mayor Bloomberg was his usual straightforward and sunshine-y self. From the Sun:

"If I was going to run, I know exactly who to go to," he said yesterday at City Hall. When pressed later to specify the people he was referring to, he refused to name them.

"Why would I tell you? Are you out of your mind?" Mr. Bloomberg said, snapping at a reporter. "If you have a real question that's serious, I'd be happy to answer it."

Bloomberg added that he didn't believe his aides were canvassing political strategists' avails, but said his aides "don't consult me about it. They can do it on their own." Yes, that's probably many Bloomberg administration aides' off-the-job job: Work on the 2008 game plan (and who wouldn't, when he gives super duper bonuses).

For Bloomberg to actually step forward as a presidential candidate, most believe that it will only happen If the primaries up until March 5, when the Texas primaries are held, don't seem to have clear Republican or Democratic candidates.