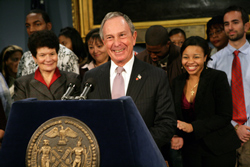 Mayor Bloomberg is bringing his bottom-line approach to governance to the issue of poverty; specifically, where is the poverty line and who is below it? The Mayor is dissatisfied with the current federal standard for judging who is poor and who is not, which is based on the cost of groceries to feed a family. The current federal standard is 42 years old and criticized by many as totally off-base and outdated, especially since it discounts other costs of living, such as rent, utilities, and childcare.

Bloomberg, who made his fortune delivering information to financial decision makers, wants to use more information to create a truer picture of poverty levels. Now he wants more inputs factored into the poverty line and others around the country are hopeful that he succeeds. A research director at the National Conference of State Legislatures said “Because it is New York City adopting it, it could be a big step forward. As it starts generating reports and data, others will be interested and you will get more momentum.”

The initiative is very much in Bloomberg's style of governing. Frequently frustrated with inaction on the federal or state level regarding issues like the environment, and now poverty, Mayor Mike just takes matters into his own hands and forges ahead. A cynic might say that redefining poverty levels simply serves to funnel more federal aid to New York City, but supporters of his initiative claim it's in line with his pledge to reduce poverty by any means, including paying poor people to behave differently.