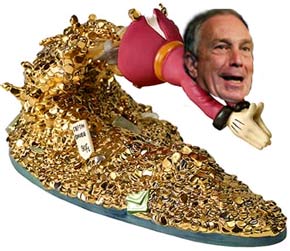 After his $500,000 donation to NY State Republicans was revealed, Mayor Bloomberg explained why he did it to reporters while attending a Mayors Against Illegal Guns conference, "I've said repeatedly, I will help those who help us. They have stood up for the city a number of times — when we needed to have a voice in Albany and we didn't have that voice from the Assembly or from the governor, whether it was the last governor or this governor."

Naturally, State Democrats are insulted. Assembly Leader Sheldon Silver said, “I don’t believe that that’s what he said...The Assembly’s been there on behalf of the city time in and time out, so I think you’d better check.” Um, yeah, well, it's more about the Assembly siding with the mayor's plans like the West Side Stadium...

...or congestion pricing. Assemblyman Richard Brodsky told the NY Times that now “Whatever pressure there was on Democrats to support it is now gone.” And Assembly Carl Heastie said, "Any mayor of the City of New York needs the governor as an ally, I think, a little more than the governor needs the mayor, because there’s so much that the Legislature does to help the city.”

A source told the Daily News' Elizabeth Benjamin why the Mayor may be sour on State Dems, "They could have tried to get Mike to raise money for them, and built a relationship on any number of angles, but they were just absent. They never tried." State Republicans, when Bloomberg was a Republican, did have such a relationship.