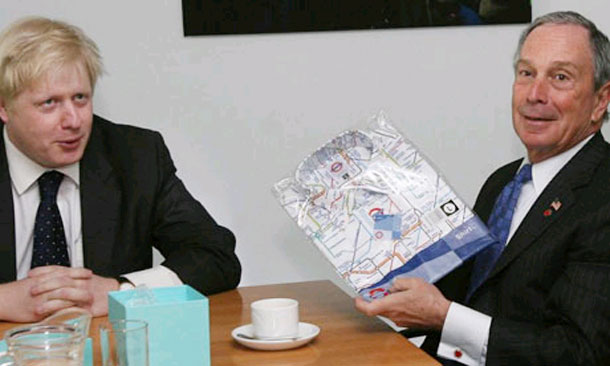 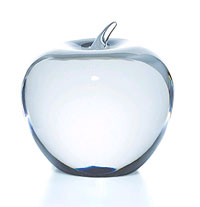 Mayor Michael Bloomberg met with London's mayor-elect Boris Johnson yesterday, and the pair shared pleasantries and some gifts, one of which was maybe not so pleasant.

From the Daily News:

"I just wanted to give you a little symbol of New York City to put on your desk," said Bloomberg, pulling out a Tiffany box containing a crystal apple. "You should look at it and want to compete with us. We can help each other."

Johnson thanked him, then pulled out his own gift - a collared shirt printed with a map of London's subway system, garish enough to prompt guffaws throughout the room, still in its store-bought package.

"This is a bit of an impromptu souvenir," Johnson said, as Bloomberg grimaced.

From the NY Times:
The gift elicited a startled grimace from Mr. Bloomberg.

“This is to convey the frugality of the new regime,” Mr. Johnson said, apologetically, conceding that the present “is not the most handsomely wrapped.”

“This is a way to keep fares down, by selling merchandise,” Mr. Bloomberg offered magnanimously, quickly handing the shirt off to an aide.

Well, at least Johnson didn't give Bloomberg the Underground map boxers! But wouldn't the gentlemanly thing for Bloomberg to do is actually wear the shirt at some point? Maybe with some shorts, white socks and loafers? And you can buy your own London button down here.

Johnson is a pretty colorful figure--as the AP puts it, Johnson, "an eccentric, devil-may-care politician who came to prominence as a TV talk show guest, is nothing if not original." The Guardian has this Bloomberg-Johnson comparison. And here are some fun facts about BoJo: He was born in New York City and hates bike thieves!

#boris johnson
#london
#london underground
#mayor bloomberg
#nyc
Do you know the scoop? Comment below or Send us a Tip
A new Gothamist is coming! We’ve moved comments over to our beta site. Click here to join the conversation and get a preview of our new website.