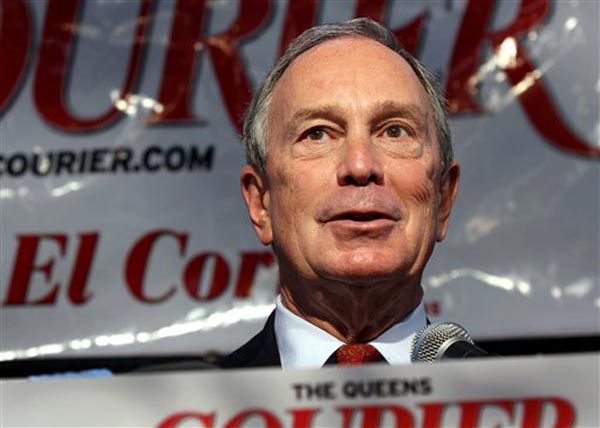 Mayor Bloomberg is speaking from the Blue Room of the City Hall to announce his desire to run for mayor again. (Live webcast here.) First, he began by noting how he was saddened to hear about police lieutenant Michael Pigott's death this morning and how it compounds the tragedy of Iman Morales's death. He said Pigott left behind three children, a loving wife and an admirable career."

Changing topics, Bloomberg says, "I love this city...I have loved every day I have served as Mayor. There's nothing better than being able to make a difference in people's lives." He emphasizes how the financial crisis has left NYC in an uncertain future. Bloomberg doesn't think the job will be done when his second term is done, and points to his experience as why he'd be the person to continue to lead the city. He said he's spoken with City Council Speaker Christine Quinn and that his administration will work with her team on a bill, and if the City Council passes it, he will run for mayor again. And he'll let the voters decide whether they want to vote for him.

A reporter asked what's different about this crisis, versus September 11, 2001 (when Rudy Giuliani was mulling a third term). Bloomberg said in spite of the tragedy of 9/11, people "pulled together right away" and said "We're not going to let the terrorists take away our freedom." But the financial crisis is a global, long-term issue.

Bloomberg is positioning his potential addition to the ballot as another option for voters. He also name drops Senate majority leader Harry Reid (D-Nevada) who called him to say he (Reid) doesn't like term limits. He thinks term limits are good, but his issue is with two vs. three terms--it's about giving lawmakers enough time to learn about their job.

When asked if New Yorkers will view this as a power grab, Mayor Bloomberg says they can decide at the polls and either vote for him or not. Regarding reports that some staffers don't think it's a good idea for him to run again, he said that's a credit to him picking people who don't always think he's right. He wouldn't characterize them as being for or against a third term. "The bottom line is we face some tough times. I'd be honored to run again and if I'm voted again, I'd be honored to serve." He also thinks his second term has been better than his first.

Bloomberg: "This is a chance to continue the direction the city has been going in." He cites his experience in attracting some of the best people to work for the city and emphasized how he wants to make the next 455 days of his second term the best. He also said it was too early to say what party he would run under. Again, the voters can decide at the polls--and he thinks during these tough times, people like more choices. Wow, and Bloomberg cites the Chicago machine, namely Richard M. Daley as being an example of someone who has helped Chicago thrive without term limits (he called Chicago a clean, thriving city that people are moving to).

Also, there's no time to add a voter referendum on this November's ballot.

#mayor bloomberg
#term limits
#third term
Do you know the scoop? Comment below or Send us a Tip