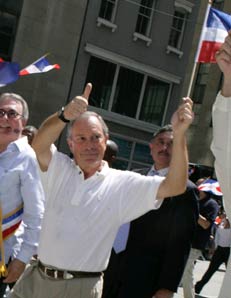 Mayor Bloomberg may have made $1 as Mayor of New York City last year, but know this about our billionaire mayor: His earnings from his media company and other investments amounted to more than $500,000, thanks to the super-redacted tax returns he made public.

Newsday says the returns are "ambiguous," as Bloomberg only gave a vague sense of his 2006 earnings because more detailed information could be used by his competitors. Using the dollar range "G" ($500,000 or more), he said that he made "G", paid out "G" in household salaries, and paid "G" in taxes.

Bloomberg did cash in two Law & Order royalty checks (both under $1,000 for his stints on the show) and cashed in a 401K and IRA account. The Daily News added he "overpaid state taxes by at least $500,000 and federal taxes by more than $1 million." He also put at least "G" into his charitable foundation, and he owns six homes, including "condo on Park Avenue where an ex-girlfriend lives."

Mayor Bloomberg is estimated to be worth between $5 and 13 billion. And his $1 mayoral salary is really 93 cents after taxes.