Mayor Bloomberg is More Giving Than Ever 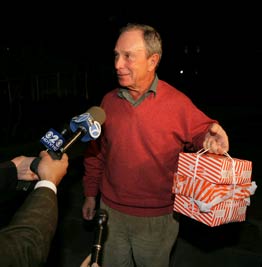 Bloomberg's giving has been generous ever since becoming mayor, prompting the Sun to note that "the largest jump in his contributions [occurred] last year, amid mounting speculation he will run for president." And as if on cue, the Mayor's spokesman, Stu Loeser, said, "The mayor's increased donations last year speak to just how seriously he takes the challenge of trying to make the world a better place." We bet Loeser had to resist the urge to say, "And it would be even better if he ran the country!"

Some of the mayor's past donations have been towards big projects, like $100 million for stem cell research at Johns Hopkins in 2006, to ones related to the city ($15 million to the World Trade Center Memorial Foundation). Here are some of the thousand-plus charities he donated to last year.

While making his various denials that he's running for President, Bloomberg has emphasized that he's looking forward to his post-Mayor life as a philanthropist.

Mayor Bloomberg with a gift of Junior's Cheesecakes at a meeting to discuss a third party run.