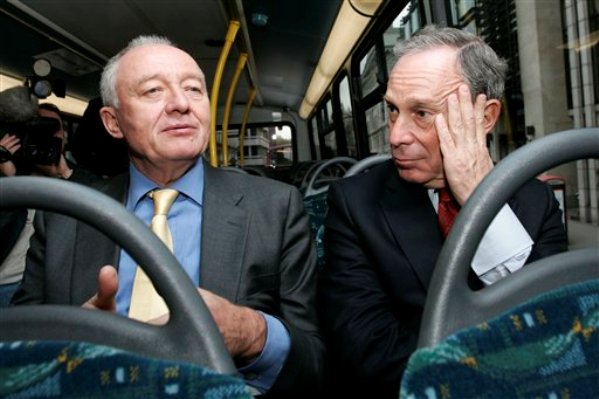 Mayor Bloomberg continued his Transatlantic trip, heading from Paris to a couple stops in Britain. And if you believe the billionaire isn't running for President, well, get a load of what he said while speaking to Britain's conservative party:

“The Conservative Party in the U.K. is much more fiscally conservative than many American politicians who call themselves conservative. Too many of our conservatives in the United States want to run up enormous deficits and hope that some way, somehow, someone else will pay for it. That’s not conservatism, that’s alchemy at best, or if you like, lunacy.”

Meow! The NY Times pointed out how the Mayor also pointedly said President Bush, “I think, never vetoed a budget... On the other hand, Congress has passed a lot of very big budgets that we can’t afford.” Which prompted the White House to say that the President hasn't had to veto budgets with a Republican Congress and that "the deficit has declined $200 billion and we’re on a path to balance the budget within five years."

Mayor Bloomberg also said, "I've always thought that what party you're in is so meaningless. can't imagine why anybody cares. The real issue is the merits." The Sun reports he "received a standing ovation despite a somewhat rambling speech."

And today, Mayor Bloomberg met with London Mayor Ken Livingstone to discuss congestion pricing and the ring of steel. They traveled on a London's buses and subways - hey, we haven't seen Mayor Bloomberg on a bus yet! His chauffeuer should figure out a good route to drive him to the bus.