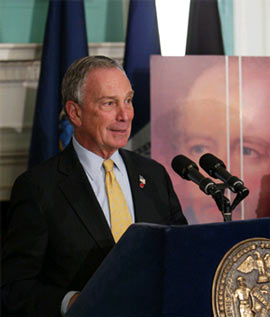 Possibly on a Brooklyn-bound F train: Mayor Michael Bloomberg. The Mayor's "bullpen-style" offices need some new paint, a new carpet and a few other fixes, so Bloomberg and his staffers are temporarily relocating to work out of the Office of Emergency Management headquarters in Brooklyn on Cadman Plaza East. The Mayor explained, “Somebody’s going to kill themselves with all of the rips in the carpet." Nice to know that he's concerned with personal injury lawsuits against the city from its employees!

The city opened new $50 million OEM offices late last year, the first permanent OEM location since the old one was destroyed on September 11, 2001. Bloomberg said of the move, "It'll, No. 1, show everybody that there is another part of this city, [and] No. 2, it'll show that if we had to evacuate City Hall, we've taken the steps and we've practiced." And the Sun reports:

The mayor said he'd continue taking the subway to work, although he will be in Idaho at the end of next week for the annual conference that investor Herb Allen hosts in Sun Valley for press, business, and, technology titans. When asked whether he was trying to get further away from the City Hall press corps, he said: "Keep in mind it's one subway stop away, so let's not get too carried away with how far we're moving."

Heh! Our guess on the Mayor's route: He'll take the 6 to Bleecker, and then transfer to the F at Bleecker/Broadway-Lafayette to

York Street. If only Mayor Mike were taking a Manhattan-bound F train during rush hour - then he'd know what a crowded subway was like.

This isn't the first time Bloomberg has worked in Brooklyn. During the transit strike, Mayor Bloomberg was camped out at the OEM's temporary offices in Brooklyn.