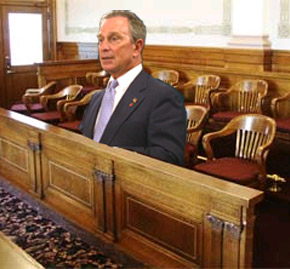 Mayor Bloomberg will walk across the street from City Hall tomorrow morning to report for jury duty at Manhattan Supreme Court. It won't be his first stint in the jurors' box. Bloomberg reportedly has served state jury duty five times since 1981. The Daily News reports that he served in 2001 on his 59th birthday "when he was openly flirting with running for mayor but was not an official candidate."

The Manhattan Supreme Court handles civil cases where damages could total more than $25,000. As a member of a jury of a defendant's peers, we wonder if Bloomberg will be weighing the fate of some other New York billionaire. His call to $40-a-day public service is not without precedent. Former Mayor Giuliani served jury duty while in office (he answered the question of his place of residence, "Gracie Mansion.") Of course Giuliani was elected foreman, and he oversaw the deliberations in a case where a man was suing his landlord for $7 million because his genitals were allegedly scalded by a too-hot shower. That's going to be a tough case for Bloomberg to top, but we'll keep our fingers crossed.