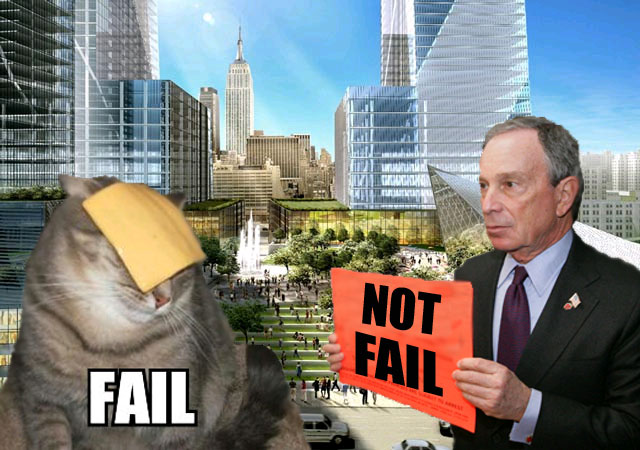 Mayor Bloomberg tried to rally hopes for a happy ending to the saga of the West Side rail yards by telling reporters, "The plan isn’t dead by any means. Hudson Yards is the most exciting opportunity New York has.”

On Thursday night, the MTA issued a statement saying that negotiations wit developer Tishman Speyer had "reached an impasse" and that Tishman "no longer" had "development rights" to the 26 acres a few blocks west of Penn Station. The MTA has a meeting with Tishman Speyer on Monday, but MTA CFO Gary Dellaverson said, “I’m not going in with an expectation" and said Tishman Speyer has "taken a position which I’ve articulated to them was quite clearly unacceptable. They’ve asked to meet, therefore I’m meeting with them.”

According to the Daily News, even though Tishman had put $11 million in escrow for the deal, the developer wanted to "postpone closing on its lease" for the eastern part of the site "until the City Council rezones the western half of the property." The Times has more:

The rezoning process was expected to take at least 18 months and a delay would have meant the authority had to wait longer before beginning to receive payments.

But it also meant that if the rezoning failed to match the developer’s plans, Tishman Speyer could have walked away from the entire deal, leaving the authority to begin the process all over again.

“It involved a free warehousing of the deal for 18 months,” said H. Dale Hemmerdinger, the authority’s chairman. He said that changing the deal in such a fundamental way took it beyond the basic terms that the authority’s board had authorized and would have been unfair to other bidders, which had been told that such an arrangement was not allowed.

Bloomberg, who is in London and met with Rob Speyer and his father Jerry Speyer there, said, "My hope is that the state government, really the M.T.A. in this case, can get together and solve the problems they have and that Tishman Speyer has, so that they can come together." Tishman Speyer also issued a statement expressing hope about the project's fate.

Assemblyman Richard Brodsky plans to introduce a bill to create a new agency to take over control of the West Side Rail Yards project from the MTA. The Observer says Brodsky's bill would give the MTA the chance "receive the cash for its capital plan, as the new authority would borrow money to buy the rail yards itself, then sell the land out parcel-by-parcel to developers as they are ready."