Mayor Bloomberg and His Well-Planned Non-Candidacy 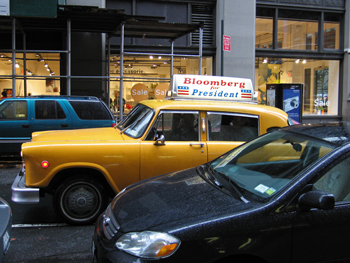 The New York Times looks at the man behind the Mayor's deliberate non-run for the Presidency. Kevin Sheekey is a 41-year-old political consultant, who defers to his boss, but is taking a good amount of the credit for putting the billionaire's dollars to good use in an unofficial campaign for President. As the Times describes it, Bloomberg is criss-crossing the country attempting to gain support and not campaigning in public. In private, Sheekey has been preparing power brokers for the possibility of another Ross Perot, except less crazy and with a gameplan for winning the whole race. The whole exercise is based on giving Bloomberg a good return on his political and financial investment:

Mr. Bloomberg is worth $5 billion to $20 billion, probably closer to $20 billion, Mr. Sheekey says. The mayor wants to give it all away, eventually. In 2001, he spent $74 million on his first mayoral campaign. He could have spent that money on, say, a smoking cessation program, but instead he got elected and then banned smoking in bars and restaurants — arguably having a greater impact. So rather than give away $1 billion in 2008 to benefit Americans, why not spend $1 billion to get elected if he thinks he can benefit America as president?

We don't know if that's brilliant or frightening.

In other news, Mayor Bloomberg is frowning on a proposed bill in the City Council that would regulate what landlords would do with the data gathered by tenant keycards like the one's introduced at Stuyvesant Town and Peter Cooper Village. The cards record the comings and goings of residents and often include a tenant's photos. Some residents fear that the cards are simply tools to find out if they are illegally subletting their apartments. Privacy and tenant advocates would like personal information about tenants' entrances and egresses to be purged once a month.