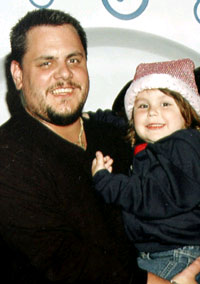 Yesterday, Mayor Bloomberg met with Joseph Zadroga, whose son James was a NYPD detective and worked hours of rescue and recovery after the 2001 World Trade Center attacks. James Zadroga's death has been controversial, as the NYC medical examiner's office ruled that his death was not due to exposure to toxic WTC dust but prescription drug abuse, findings that contradicted the expert opinion of two other doctors. Bloomberg entered the fray when he said that Zadroga wasn't a hero, only to make Zadroga's family upset and to take back his remarks and say, "It's a question of how you want to define what a hero is, and certainly I did not mean to hurt the family or impugn his reputation."

After the private meeting with Zadroga's father, Bloomberg told reporters, "I believe that James Zadroga was a hero for the way he lived, regardless of the way that he died...I committed to the family we will find a dignified way to honor his son's sacrifice." Joseph Zadroga seemed satisfied with the meeting, in which the Mayor repeatedly expressed his apologies, reportedly saying, "I apologize. I may have spoken off the cuff, and I'm really sorry for how it came out. I'm sorry. I'm apologetic."

However, there was some confusion. Zadroga's lawyer initially said that the mayor would tell the ME to "reconsider" his findings, which the Mayor's office denied, emphasizing that the ME's office is an independent office. Turns out that the Mayor simply said he would ask the ME to take a look at medical findings from the Zadrogas.

The Daily News has an editorial about what "Mike owes Zadroga": "He must order a review of Hirsch's finding. And he must establish a board of experts who will consider petitions for inclusion on the official roll of 9/11 dead, using standards that will stand the test of history."