"First and foremost, [the goal is] preventing homelessness," de Blasio told reporters. "This is what I advocated for the most—stopping people from becoming homeless while we can. That is the smartest strategy and we’re going to do a lot more on that front."

There are currently nearly 58,000 individuals in the city's shelters, 23,432 of whom are children, thanks in no small part to the slashing of rental assistance and the proliferation of privately-owned shelters during the Bloomberg Administration.

According to the Mayor's office, administrative reshuffling will save the city $38 million in combined administrative services. Homelessness prevention and rehousing services will also be combined, like DHS's Homebase and HRA’s Homelessness Prevention Administration. Rental assistance programs will be consolidated, so New Yorkers won't have to navigate the granular differences between, say, LINC and SEPS.

As of this week, DHS and HRA will report to a single Commissioner of Social Services, Steven Banks. The appointment is not surprising, since Banks stepped in as interim head of both agencies last December with the departure of then-DHS Commissioner Gilbert Taylor. Banks, formerly the chief of the Legal Aid Society, is a long-time affordable housing advocate. Yesterday's announcement marks the conclusion of Banks's 90-day review [PDF] of the shelter system as a whole, launched to identify inefficiencies.

"We found that for many years it was... an alphabet soup of services," Banks told reporters on Monday. "If we streamline all of these functions we can save money."

The streamlining plan also includes the recently-implemented HOME-STAT program, which aims to maintain an accurate daily count of the number of street-homeless New Yorkers in an effort to better administer services. The plan mandates street canvasing and a larger NYPD homeless outreach unit, which some advocates fear will have the adverse effect of criminalizing homelessness. 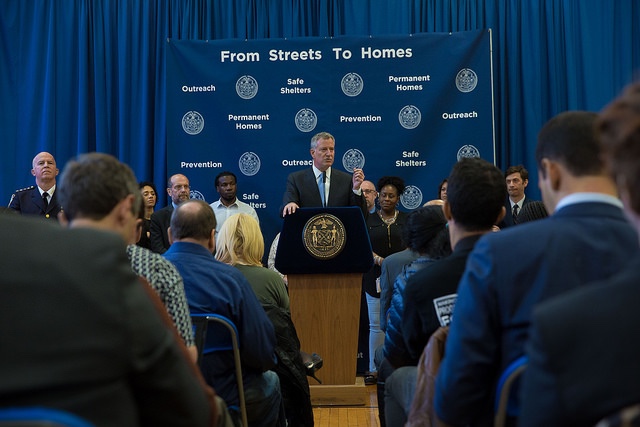 In an op-ed published Tuesday, the NY Times' Editorial Board argued that the consolidation effort, while logical, is too little, too late. The Board also argued that Governor Andrew Cuomo could do a better job of pulling his weight. Cuomo's 2016 State of the State promised a $20 billion 5-year plan to go towards 100,000 units of affordable housing, 6,000 beds of supportive housing, and 1,000 emergency shelter beds. Three months later, there's no funding source or timeline to speak of. ("We're also going to continue to urge everyone in Albany to institute reforms we need," de Blasio said.)

O. Rogers, a formerly homeless man from the Bronx and a member of the advocacy group Picture the Homeless, praised the Mayor for working closely with Banks to untangle some of the logistics of the shelter system, but argued that any plan to improve circumstances for the city's homeless population is deeply handicapped by de Blasio's controversial affordable housing plan.

"Meanwhile, as in the past, City Hall is not ready to go up against the real estate interests who profit from converting housing for poor and middle class families to $2,500-a-month apartments... as recent headlines have shown, he's currently under federal investigation in connection with a real estate developer who contributed to his campaign."