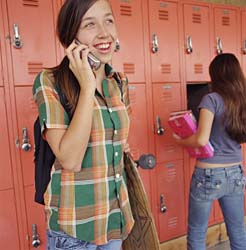 Ah, the legislative process at its best. The City Council approved a bill to allow students to bring cellphones to school in July. Of course, this flew in the face of Department of Education policy, which has had a ban on cellphones for years (and the ban has been found to be constitutional), because city and school officials believe that phones are disruptive in class.

Families, including City Council members and their public school-attending children, cite the fact that cellphones are a "lifeline" between students and parents (see these tales of cellphone-less horror). Mayor Bloomberg stuck to his guns and vetoed the bill, only for the City Council to override the veto yesterday. Bloomberg said, "This is a bill that doesn't change anything. You just don't have the right to bring it into the school, and that's not changing. Our teachers have a tough enough job."

So in the end, it's unclear that the City Council bill actually advances the right of the students to bring phones into school, as it comes up against the DOE's rules. City Council member Lew Fidler, who co-sponsored the bill, suggested he might sue the DOE. From the Daily Politics:

The DOE was going to install cellphone lockers outside a few schools as a pilot, but that program has been delayed (of course) as well as criticized by some.

Students who attend schools that have security and metal detectors to look for weapons sometimes have stores babysit their cellphones or hide them in their clothes. And when the traveling metal detectors come to school, well, hundreds of cellphones can be confiscated.